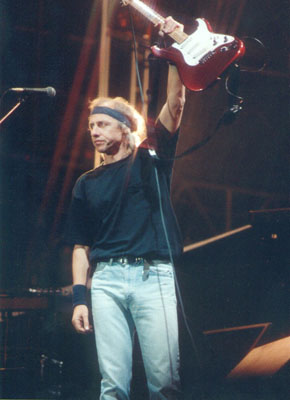 Howard Stern and his gang were discussing their top guitarists the other day. Howard’s top three? #1: Jimi Hendrix. #2. Eddie Van Halen.  #3: Leslie West.  It’s pretty hard to argue against Jimi, but from there, all bets are off. Everyone’s got their opinion. Howard likes his Van Halen and he loves his Mountain from back in the day.

In my top 5 would have to go Mr. Mark Knopfler. His style of playing – those clean, distinct Strat solos – are, well, music to my ears. Think about it, how many times have you heard “Sultans of Swing” on the radio, and air-guitared along every time? Or finger-guitared in my case. I’ll shake my fingers around like I actually know what I’m doing. And those Dire Straits tunes, they never get old!

Looking back to 1992, it was the year after the release of Dire Straits’ final studio album, On Every Street, and their final tour was in full swing. This show could easily make it as a live album. Y’all will enjoy…

This tour was in support of this album…

Gettin' Up with the Get Up