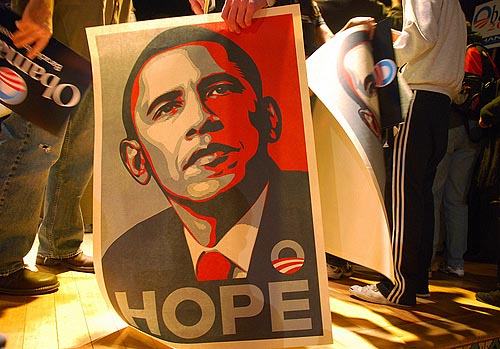 What an amazing day. All of the majesty, symbolism, and History behind today’s inauguration of Barack Obama was nothing short of breathtaking. Thanks to ABCNews.com, I was able to catch the Oath and the speech at work. It’s a very large corporation, with layers of security, firewalls, web filtering software and the like, so I was happy to see that at least one web site’s streaming video of the ceremony was working.

I must say though, I wasn’t impressed that: a) there was no acknowledgment by the company, no communication to its thousands upon thousands of employees, that addressed the magnitude and significance of the day.; and b) there was absolutely no enthusiasm, chatter – no nothin’ – from my co-workers. Sure, the economy sucks, everyone has a job to do, work work work, focus focus focus, blah blah. But to go the entire day at work with no one (around me, at least) even opening their mouth to talk about this historic day? Well, I was a little disheartened and disappointed. I figured my enthusiasm for the day would be matched at least by some people. Maybe they were out there, but they sure weren’t verbal about it.

But let my rant end there, and let me sum up by saying how refreshing it will be to wake up tomorrow with President Obama at the helm. I’m proud of my country, and I have the utmost confidence that this President will be a great leader through these very tough times.

Old Crow Medicine Show – I Hear Them All (mp3)

Did anyone see Old Crow Medicine Show on Austin City Limits recently? Great set, and prompted me to dig out some of their stuff. This song is fitting for the moment, in my opinion.

The Boss Was Made for Lovin' You?