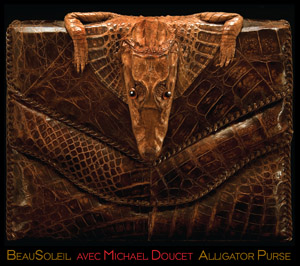 The great thing about cajun music is that you know it’s going to raise your spirits and it’s gonna shake your rump. As the torchbearers of traditional Cajun music since their inception in 1975, Michael Doucet and Beausoleil accomplish this with every album. Cajun and zydeco barn burners are a staple of their work. But interspersed always are some surprising gems that stray from the mold.

This week, Beausoleil released Alligator Purse, their first album for Yep Roc. The fun traditional stuff is represented in songs like “Reel Cajun (451 North St. Joseph St.)”, “Theogene Creole”, and “Marie”. But the new territory is just as fun to explore. Like their reworking of Bob Dylan’s cover of Muddy Water’s “Rollin’ and Tumblin'” (yes, a cover of a cover) – they cajunize it and sing it in French: “Rouler et Tourner”; their version of J.J. Cale’s “The Problem” is a creole roots-rocker, with Doucet reaching down into his lower vocal registers for a sweet whiskey-soaked sound [By the way, why is it that I like every J.J. Cale song I hear, yet I don’t have ANY of his stuff? I need to fix that.].

The band brings in some special guests: Garth Hudson (The Band) on “I Spent All My Money Loving You”, Natalie Merchant on “Little Darlin'”, and Lovin’ Spoonful’s John Sebastian, among others.

The album is a journey through American music, southern Louisiana style. It’s rich, tasty, zesty, and genuine. I’ve been eatin’ it up like a big ol’ hot bowl of jambalaya baby. Week III delivers!

Beausoleil will be all over the country this year, including April 3rd here in Arizona at the Chandler Jazz Festival. Come on down and join me.