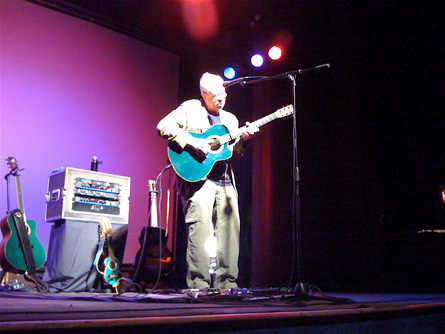 There are two Bruces in the music world I am very fond of. One is Springsteen, the other is Cockburn. This weekend, the perfect storm of shows came to pass: the Weekend of Bruce.  Friday night was the Boss. And on Saturday, the wife and I took off for Flagstaff on an anxiously awaited 24 hour getaway to see Bruce Cockburn.

I discovered Cockburn in 1994, when his great album Dart to the Heart was being played on local radio. It was an amazing discovery for me – his albums date back to 1970 (the year I was born), and I snatched most of them up. Masterful guitar playing, a clear and soothing singing voice, and a very diverse range of subject matter when it comes to the lyrics: from affairs of the heart to land mines, the metaphysical and spiritual to the eradication of Native American culture. He’s a very intelligent and thought provoking man.

It had been about 10 years since I last saw him live, so I made sure I scored tickets early when I heard about it. And that paid off, because we found ourselves in the front row last night (man, what a weekend for great location!).  The setting was the Orpheum Theater in Flagstaff, a great little theater on Aspen Street. It’s a nice long room with a large stage in front, and a bar area in the back which runs a good way along the side of the theater. We were bummed to discover that it closes at the end of April – permanently. Another great venue bites the dust (like they always seem to).

Bruce had three acoustic guitars set up, along with a dobro and a tiny 12-string guitar called a tarango (which originated in the Andes of South America). Out he came in army/cargo pants and a tan jacket, with his gray hair pulled up into a pony tail on the top of his head, and his signature specs. Speaking of gray hair, there was quite a bit of it in the crowd. There were a few scattered “younger” folks like me and my wife, but I would say most of the crowd was 50+ (Bruce undoubtedly has many more younger followers up in Canada, where he’s very revered and well known, as he should be).

On to the music. With a catalog that spans back to 1970, Bruce had plenty to choose from. He reached as far back as 1979 for “Wondering Where the Lions Are”, from one of my favorite albums of his – Dancing in the Dragon’s Jaw. The crowd stayed pretty silent throughout (at the venue’s request, being a quiet solo acoustic show), but Bruce implored the crowd to sing along to the chorus on this one. Nice moment. He also reached back to “How I Spent My Fall Vacation” – a highlight from 1980’s Humans, for the opening song of his encore.

But most of the two sets focused on his tunes from the last couple decades. It was great to hear a handful from Nothing But a Burning Light, Dart to the Heart, and Charity of Night, which were three of the albums that cemented my love for his music in the mid 90’s. “Night Train” and “Pacing the Cage” came from Charity (you may know “Pacing the Cage” from Jimmy Buffett’s version). “Kit Carson” and the show closer, “Child of the Wind” came from Burning Light – the latter song has a simple powerful lyric that I had in my head when I woke up this morning: “I love my sweet woman down to the core.” And from Dart to the Heart, Bruce pulled out the tarango for “Bone In My Ear” – one of the many songs that had me mystified at how this one man can make so many sounds come out of an instrument.

It’s hard to describe Bruce’s finger picking style, but I’ll try. His right hand is fixed in sort of the Hawaiian “hang ten” look – with his thumb providing the bass lines on the top strings, and his pinkie finger resting on the guitar under the strings. The jaw-dropping part is that his middle three fingers look like they’re completely still when you’re facing him. But holy jeebs, the sounds – the amazing picking that generate from the tips of those fingers underneath! I’m always in awe seeing him play live, and even more so last night sitting 15 feet from him. See it for yourself right here.

Other highlights for me: “Last Night of the World”, “Beautiful Creatures” (featuring a hauntingly beautiful falsetto in the chorus), “Elegy” (a slow and sublime instrumental), and of course it’s always great to hear ‘If I Had A Rocket Launcher”.

It’s almost midnight on Sunday night, the end of an amazing weekend of music. It was a once in a lifetime “perfect storm” of Bruce Music, and how satisfying to the soul to sit back and reflect on these past two nights – experiencing two great musicians up close, soaking up all their years of musicianship – such experts at their craft.

...and I took the sword from the Lady in the Lake