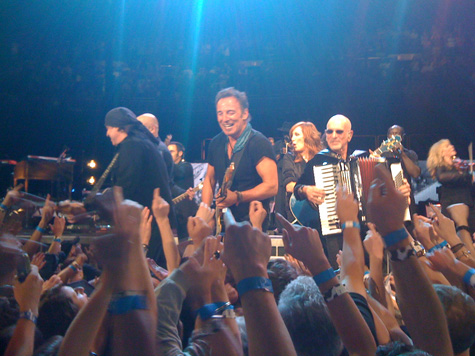 Well that was one for the ages. Bruce and the Band rolled into town yesterday for the first time in seven years. I decided to do it right, and show up early for a chance in the “pit”, the fenced off section at the foot of the stage. Of the 960 people who showed up for numbered wristbands, I was one of the 400 who made it in.

The only person I know who’s willing to put in the work for the pit experience is my brother Dave, and he’s in Boston, so this was a solo mission. A “mission from God”, as Elwood put in the Blues Brothers.

Last night was only show # 2 of the Working on a Dream Tour. But just a couple minutes into the opener, “Badlands”, it was clear that Bruce and the band were in prime form, and were feeding off the raucous energy of the Arizona crowd (seven years is a long time to wait!).

Of the new tunes, “Outlaw Pete”, “My Lucky Day”, and “Working on a Dream” were well received – but he really connected on “Kingdom of Days” (which he sings with his wife Patti) and especially “The Wrestler”. With Nils Lofgren on acoustic guitar, Bruce poured it all out at the mic, and surpassed the studio version, I thought. [You can see the video from last night here].

It was great to experience “Seeds” live – a hard luck rocker that appears on the Live 75-85 box set. Nebraska’s “Johnny 99” followed it – the full band version. And then “The Ghost of Tom Joad”, with Nils blazing on lead guitar.

Bruce was  taking requests, too. The signs were abundant in the crowd. Before “Working on the Highway”, Bruce worked the crowd and collected a handful. The “winners” were “Downbound Train”, “Because the Night”, and, later, “Rosalita” during the encore.

“Downbound Train” is one of my all time faves – I wonder how man car hours I’ve logged singing that song at the top of my lungs – and it was so nice to hear it / see it right in front of the man.

The atmosphere last night was absolutely electric: Bruce and the band grinning ear to ear, The “Big Man” Clarence Clemons even shuffling across the stage. “The Big Man’s dancin’!” Bruce cried…

Since I was solo, and could really let the Bruce fan in me rear its geeky head, I Twittered the whole set list. Also, I hung around the arena after the show, looking down on the loading dock a few hundred feet below, watching the roadies load the trucks, and Bruce and the Band’s fleet of black limos and SUV’s waiting for their passengers. At about midnight, Bruce came out of the arena and got into the front passenger seat of his luxury SUV. Two police motorcycle escorts led the way up the ramp. The next thing I see? Brake lights. And off to the races I went. The Boss stopped on the street, rolled down his window, and signed for the few lucky fans who waited it out. After running a couple hundred yards, I had him sign a 5×7 card I had tucked in my back pocket, and I think I said to him: “Bruce….Gammage Auditorium! [where he signed my tour program in 1996]… love you… *heavy breathing…” Leave it to Bruce to make me feel like a pimply 16 year old…

As I walked back to my car in the cool desert air, I was on cloud nine. Mission accomplished, and faith rewarded.

See my photos from the night here in my Google album.

Setlist:
Badlands
Outlaw Pete
My Lucky Day
Night
Out in the Street
Working on a Dream
Seeds
Johnny 99
The Ghost of Tom Joad
Working on the Highway
Downbound Train
Because the Night
Waitin’ on a Sunny Day
The Promised Land
The Wrestler
Kingdom of Days
Radio Nowhere
Lonesome Day
The Rising
Born to Run
* * *
Hard Times
Tenth Avenue Freeze-out
Rosalita
Land of Hope and Dreams
American Land
Dancing in the Dark

Up the Hill: Bruce Cockburn @ the Orpheum Theater in Flagstaff