For the past few years, I have received many comments which basically come down to one central theme: It’s about time I started acting my age.

I am 42 years old. But even when I was in my late thirties, many people around my age and even younger were surprised to hear that I still like to go shows at First Avenue. In fact, many of them were shocked that I left the comfort of my easy chair in front of the TV and (gasp) went out! Having fun with friends was even more shocking. That’s what younger folk do! I should just spend all of my time with my family. At first, I just sort of blew them off as being silly. Or perhaps lazy. Then I realized that our culture has essentially evolved into a mild variation on the 1976 film Logan’s Run.

In the film, as soon as people reach the age of 30 they are liquidated. Of course, that does not literally happen in our culture. Yet, somehow…some way…some insane fucking bullshit way…we now live in a country where anyone that is 30 years or older is now Grandpa.

We have always been a culture that looks at youth as being the center of all that is perfect. Ages 19-26 or so have always been considered the “best”  years. But now, anyone in this age range is to be worshiped as if they are Jesus Christ.  And, nauseatingly, they know it. In fact, a sort of “Mid-20s Mafia” has sprung up and once you are out of that age range, you are expected to marry, have children, and relinquish all youthful endeavors in your life. If you don’t do these things you are sneered at, jeered, vilified, and emotionally abused by the Mid 20s Mafia.

When you turn 30, it’s time to be fitted for your coffin.

If you continue to act as if you are still in that age range…see bands at clubs, have fun with friends out on the town, get drunk, high and spend all weekend fucking the crap out of someone you love…then you are gross according to the Mid 20s Mafia. And weird. Why? Because 30+ means Grandpa. And grandpa doesn’t do those things.

Grandpa watches TV in his comfy chair. Grandpa listens to bad music such as Dave “Ass-Cock” Matthews. Grandpa rarely goes out and when he does, it’s to the cabin in the summer. Grandpa shouldn’t have any friends to go out with on the town. Going out at that age is “weird” since he should be home with his family. Any friends should be limited to those with whom he can gripe about mowing the lawn at the cabin over a beer at yet another (and seemingly never ending in a series) monumentally stilted social gathering at a fellow parent’s home. Those are the rules.

I listen to Asher Roth’s song “I Love College” and I say fuck those rules. Fuck them hard. Not in a loving slide-the-cock-in-the-ass way. But in a colossal stick-it-to-the-man way. 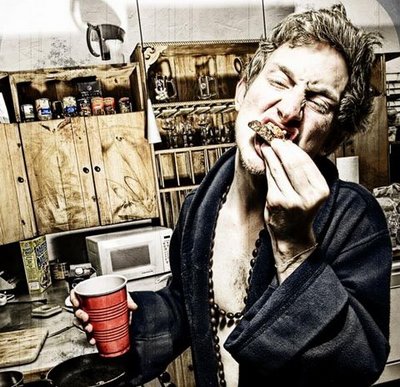 My first reaction upon hearing the song was actually slightly derisive. Doesn’t it represent the decay of our modern culture? And then I felt guilty for liking a song with this chorus.

Not exactly Lennon and McCartney.. But then I heard the line

and quickly realized that the song is not really about that. It’s about the simple fact that life is about fun and friendship. Everyone has a limited amount of time on this planet–some shorter than others–and turning into Grandpa at age 30 + is beyond a complete waste of that time. It’s insane. People shouldn’t be confined to only cutting loose in college. Starting your decay at such a young age is fucking ridiculous!!!

Now, I want to be clear about something. I am NOT suggesting that people blow off work or school and party all the time. Even Asher, in the song, admits that he “needs to get to class” at the end. I am suggesting that people should stay young at heart. This is not to be confused with being immature which would include blowing off one’s obligations to themselves or the ones they love. It most certainly fucking DOES  include NOT living by someone’s (and by someone I mean people who have a ten foot pole up their ass) rigid vision for what all of us are “supposed” to be…at any age.

I am begging all of you…and especially those in the Midwest where this problem is as prevalent as a fart (after a night of drinking) that hangs there forever…don’t become Grandpa. I don’t care how old you are. Don’t live by society’s social rules any longer. Stay out with your friends until 5am and then go get breakfast…on a Tuesday night. Drink several glasses of red wine, walk up to a girl/guy you don’t know, and tell them how fucking gorgeous they are and how you would like to kung fu their ass and make them come. Drink your beer and smoke your weed with your good friends. Tell them how much you love them and how important they are to you.

While you are doing all of these things, play “I Love College” by Asher Roth at an extraordinarily loud volume and, as he says in the song, “dance your ass off.”

Oh, and tell the local mortician that your coffin fitting can wait until…never.