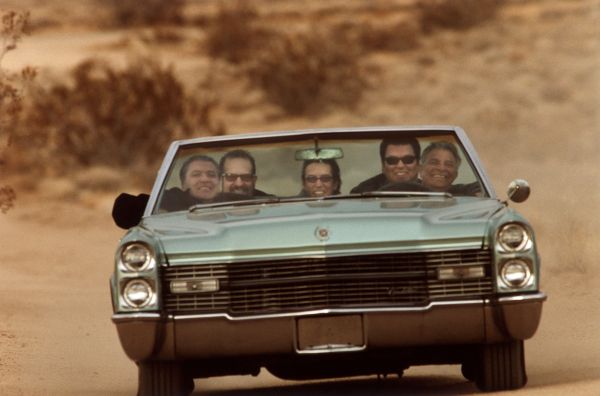 Los Lobos delivered as expected last night at the Compound Grill in Scottsdale. The wife was a great sport, and powered through two full shows with me – an 8pm dinner show and a 11pm late show. Friends Jen and Brian also rocked out all night along with us.

The Compound Grill is a brand new venue, having been open only a few months now, and it was built with live music (and good food) in mind. So the atmosphere was just fantastic – a small club feel, friendly and attentive staff, and a great sound system.  The early show was sold out with the max capacity of 200 people, so it felt like the coolest private party I’d ever been to.  Eating dinner, putting back a pint or two, with Los Lobos as the house band.

After the first show, most of the folks cleared out, leaving those of us who were in it for the two shows. I was expecting it to fill up again, but the late crowd ended up being probably 80-100 people tops.  This only elevated that private party feel. Guitarist Cesar Rojas set the celebratory atmosphere from the very beginning – toasting “Salud!” with a glass of red wine. He toasted “Salud” throughout the night, right up through the last tune of the night as the clock ticked past 1am (“Bertha”).

The highlights were many. The cover tunes included a blistering 1-2 punch of Neil Young’s “Down by the River” into Jimi’s “Are You Experienced?” in the first show (jaw dropping solos by David Hidalgo, Cesar, and Louie Perez); a great cover of Howlin’ Wolf’s “300 Pounds of Joy”; Traffic’s “Dear Mr. Fantasy”; another Jimi cover, “Red House” near the end of the late show; and of course their popular take on the Grateful Dead’s “Bertha”.

Another cool moment: slow dancing with my wife at the foot of the stage, as Lobos played a 50’s doo-wop ballad, “Daddy’s Home”. Dancing slow with the lady, and looking up to see Los Lobos playing five feet away? Priceless.

Of course, Los Lobos has a rich catalog to draw from – and the night featured old and new (full set list below) – including great versions of “Kiko”, “Evangeline”, “I Got Loaded”, and the always raucous “La Bamba”/”Good Lovin'” combo, which whipped the dance floor into a frenzy, and Hidalgo inviting a few young ladies to dance on the stage.

I always get instantly nostalgic after a great live music experience – so tonight feels a little bittersweet. The feeling I get while watching Los Lobos live is one I’d like to carry around with me every day of my life. If you’re one of the many who haven’t seen Los Lobos live, please put it on your bucket list and find out what this feeling is all about…

Cesar threw a few CD’s into the crowd last night. My wife grabbed a hold of one – their latest CD, Los Lobos Goes Disney. We listened today, and the album is a blast. It also contains a slow, beautiful tune called “Not in Nottingham” (from Robin Hood).  Check it out…

Buy the MP3 of Not In Nottingham