Hey everyone, this is Cam, another individual Pete has generously asked to periodically contribute to his blog. I’ve been holding off on this post for some time. Why?

a) I presumed that after the initial flurry of publicity there would be little coverage of Jason Isbell‘s debut album – Sirens of the Ditch – or his extensive tour with stellar opening acts Justin Townes Earle on many dates in July, and Centro-matic for much of August. I was wrong – both tour and CD are getting lots of coverage. Now this is a ‘just in case you haven’t seen it anywhere else’ post…

b) I wanted to see Jason & the 400 Unit live, and for that I had to wait until he came back to my town! Last time, I saw him open for Son Volt (which was great), but it’s different when you’re the headliner… 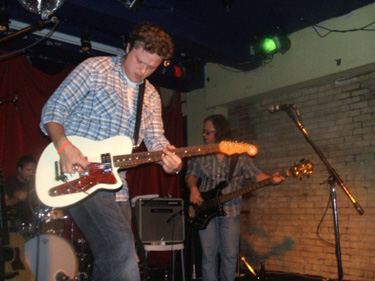 I suppose I shouldn’t be surprised by the ‘buzz’ – a talented artist releases a long awaited high quality CD and supports it with a great live show and extensive tour.

Jason & the 400 Unit finally came back to Toronto on Tuesday. The venue was most suitable for a rock show; the aging but still going strong El Mocambo, known for now-legendary shows by Stevie Ray Vaughn, the Rolling Stones, U2, and Marilyn Monroe (yes that’s correct, in ’58 apparently!) amongst many others over the years.

Considering the ‘El Mo’ is best known as a college bar, it was quite busy for a weeknight in the middle of the summer when school is out. The band took to the stage around 10:30 or so. My friend asked which one was Jason, to which I replied that Jason was in the middle, in a plaid shirt. “The country-looking guy?!” he asked, a tad concerned. I nodded as Jason picked up one of his electric guitars, and kicked off “Grown”, one of the many tunes on the new album. As always, I thought of Pete, and by extension Ickmusic, as Jason sang the lines: “… are you still dancing to Purple Rain?” After the first few bars my friends were nodding enthusiastically, and by the end there was no more talk of country.

Jason & the 400 Unit followed up on the first tune with a cover of a great song called “The Assassin”, which Jason announced will be released in some capacity in a month or so. “The Assassin” was penned by Patterson Hood, Jason’s former band mate in the band Drive-by Truckers (DBT), whom he joined in late 2001 or so and left abruptly early this year. Sirens of the Ditch was recorded on the few, brief breaks he took from touring with DBT.

Even though the album features some of his old band mates, most of the songs sound unlike his contributions with the Truckers. My other friend, who’d seen Jason with DBT in the fall, remarked that solo Jason is more “controlled”; I agree and think this is in particular reflected on the album. I also think that it’s a sign that the band has practiced hard for the tour, and is in especially fine form.

As the night progressed, Jason switched to acoustic guitar and handed lead guitar duties over to Browan Lollar, who did a great job, and continued to impress the crowd. After a short “smoke break”, Jason returned on solo acoustic before – not a minute too soon – he picked up his electric guitar and the band rejoined him for the final set of songs. These included the first track from Sirens, “Brand New Kind Of Actress”, the smoke-infused blues burner “Hurricanes & Hand Grenades”, & the classic rocker “Try”. To top it all off, the final encore was Thin Lizzy’s “Jailbreak”, which left the crowd again howling for more.

The tour is still on – see Jason’s website for more information. The 400 Unit, Jason’s band, is comprised of Browan Lollar on guitar, Jimbo Hart on bass, and Ryan Tillery on drums. Son Volt keyboardist Derry deBorja has also joined them on this tour, allowing Jason more time to focus on his guitar playing and vocals.

Buy Sirens Of The Ditch