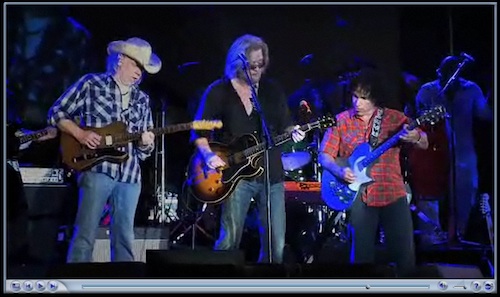 It’s been almost 2 months since the world lost Tom “T-Bone” Wolk from a heart attack at the age of 58. It’ll be an odd feeling to watch Daryl Hall go forward without T-Bone at his side.

The latest episode of Live From Daryl’s House is bittersweet, to put it mildly. It marks the final time that Daryl Hall and John Oates played with their longtime pal and music director. It takes place at the Jamaica Jazz and Blues Festival early this year. Joining Daryl, John and T-Bone are Maxi Priest and gray-dreadlocked Billy Ocean.

As usual with this great series, the behind the scenes footage between songs is just as enjoyable as the music (as is Shanique, the bartender at Memorabilia bar).

But it’s hard not to feel a helpless sadness as you watch T-Bone, so full of life and good humor at the time, knowing what was soon to come. At the same time, it’s a blessing to have footage like this, documenting his passion for music and life.

Maybe it’ll all make sense some day. For now though, it sure doesn’t. RIP T-Bone.