You may not come across many people in your daily life who are familiar with the music of Martin Sexton – much less seen him perform live. But anyone I’ve encountered who has seen his live act – people I know personally, online, etc. – has nothing but rave reviews for the guy.

Now I know why.

Martin Sexton, backed by the talented Ryan Montbleau Band (who also opened the show with an impressive 45 minute set), rolled into town last night for one of the opening gigs of his tour in support of a new album – Sugarcoating.

It was a 90 minute dose of a little of everything: roots, rock, gospel, blues, soul… and to sweeten the pot even further, who shows up to sit in for the entire second half of the show? E Streeter and local resident Nils Lofgren, that’s who! Being someone who worships at the altar of E Street – I was pretty excited.

I had spotted Nils right before the show started – wearing a jacket, t-shirt, jeans, and sporting a “I Could be Illegal” button on his lapel. He was sitting at a table not six feet away from me. And when he walked by, I had to do it: “Excuse me. Are you Nils Lofgren?” In a cool and calculated fashion (like it was the 20,000th time he’d heard this question), he extended his hand and replied “Yeah man, how are ya.”

So it was pretty cool taking in the first part of Martin’s show with Nils and his gang sitting right by me.

It’s these types of moments where Sexton stands out from the rest. His lower register singing voice is unique as is, but when he lets loose with his higher register voice – often stepping away from the microphone to really let loose – it’s hard not get goosebumps and lose yourself in the moment. And when the music includes moving standards like “America” and “Amazing”, it’s a great showcase for Martin’s supreme vocals.

“Diner” was the first Martin Sexton song I ever heard, the song that made me seek out more of his stuff. So I was happy to hear it as the second song of the night.

After a string of new tunes, the crowd really came alive during “Angeline” – from his 2000 Wonder Bar album – singing along during the fun chorus.

For “Glory Bound”, the band left the stage, leaving Martin to sing with his plugged in acoustic. It was before “Glory Bound” that Nils Lofgren stood up, walked past us and made his way through a door sidestage. When the band came out after “Glory Bound”, out came Nils with them – launching into a slow, bluesy “There Go I”. Nils launched into one of his signature solos, toying with the effects pedals and poking at the fret board…it was a sight to see – especially in the intimate confines of the Compound. 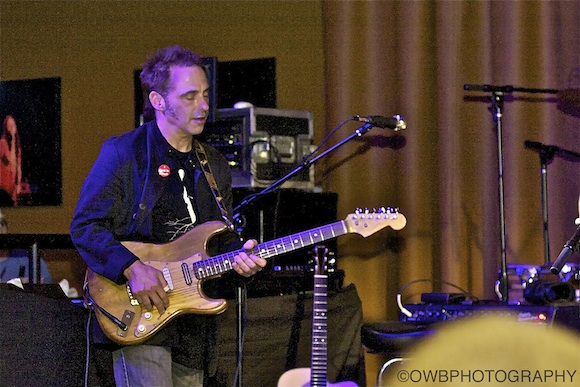 I thought Nils would sit in for one song and call it a night. But he never left the stage. He was there for the rest of the show. He joined Martin and the band for the Texas blues boogie of “Ice Cream Man”; the reggae rhythm of “My Faith Is Gone”; a short blast of Zeppelin’s “Heartbreaker”; the beautiful “Always Got Away” (a favorite of mine from the new record); the playful feel of “Failure.”

The encore started with the slower, gospel-tinged “Black Sheep”. Then, it was really time for church.

It was joy & inspiration all around as Martin and the band dove into “Turn On Your Lovelight”, intermingled with “This Little Light of Mine”, and whipped the sold out crowd into a spirited frenzy. It felt like a revival, and as Martin, Nils and the band left the stage, it was hard to come down and call it a night.

But as the saying goes, leave ’em wanting more. And that they did.

Black Sheep **
Turn On Your Lovelight / This Little Light of Mine **

Band of Horses: Live from the Central Presbyterian Church in Austin