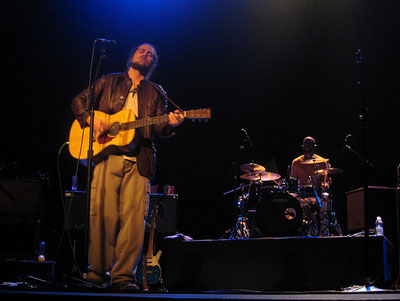 While a mass of humanity took in Fergie’s (disappointing? gasp!) set across Town Lake at the Tempe Music Festival, we smart ones were filing into the Marquee Theater to take in D.C. / Brooklyn artist Citizen Cope. It was billed on the venue’s web site as “an evening with no support”. But I was pleasantly surprised when a tall, slender female figure took the stage at 8:10 and tore the roof of the joint with a short four song set…

It was Alice Smith, who Michael featured here last August. What an amazingly strong, soulful voice, and a commanding and confident stage presence. 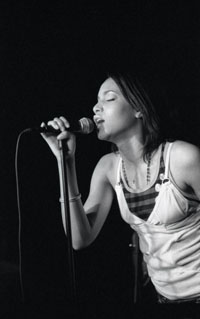 She was really fun to watch – even if it was a (too) short set. Some of the moments in her set – those notes she hit – it was like watching a bird take flight. Soaring and powerful.

The music that played over the PA before Alice’s and Cope’s sets was a good indicator of where Cope’s influences lie: lots of Al Green, Curtis Mayfield, and Bob Marley. Cope’s music mixes it all in: soul, reggae / island flavors, gospel, rock.

Cope seemed to feed off the mostly younger twenty-something crowd all night. By just the second song, “Hurricane Waters”, the entire crowd was singing along to the chorus – good energy all set long.

Cope sang and played electric and acoustic guitar. Accompanying him were a bass, keyboards, a Hammond organ, and drums (very anonymous, I know, I can’t find the band members’ names anywhere). The set list dipped from all three of his studio recordings – ‘Citizen Cope’, ‘The Clarence Greenwood Recordings”, and ‘Every Waking Moment’. All three of my current Cope favorites were performed: the dreamy “More Than It Seems”; the beautiful “D’Artagnan’s Theme”, which was solo acoustic for the first song of the encore; and “Sideways” – which was just a hair too slowed down for me. It’s a killer love song: “These feelings won’t go away, they’ve been knocking me sideways” – and I did my best to get in the moment – but in the back of my mind was that slowed down tempo – “Sideways”on ‘luudes. Not a complaint, necessarily, but an observation.

Alice Smith returned to the stage to help Cope out on “Back Together” and “107”. I can’t stress enough how impressed I was by her. Cope let her fly during “107”, where she riffed off of the chorus for a while, and left us all wanting more. She is something to behold.

The show wrapped up with “Brother Lee”, an uptempo, ska-influenced track that left everyone fulfilled on a warm Arizona Saturday night.

The tour is rolling on for the next couple of months. I recommend Cope as it is, but with Alice Smith on the bill, this is a must see. They’ll be in San Diego’s House of Blues on Monday night (3/31) and Mandalay Bay’s House of Blues in Vegas on Tuesday (4/1). Catch the rest of the dates here.

Bad Day (? – not sure about the opener)
Hurricane Waters
My Way Home
Bullet and a Target
Sideways
If There’s Love
Salvation
Let the Drummer Kick
Every Waking Moment
More Than It Seems
Back Together (w/ Alice Smith)
107 (w/ Alice Smith)
Son’s Gonna Rise