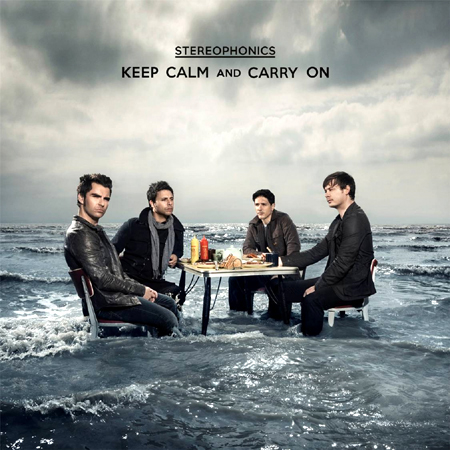 It took seven months but the fine folks at Island/Mercury finally released the new Stereophonics album here in the US. Being the absolute geek for the lads from Cwmaman, Wales, I naturally sprung for the import, released last November in the UK, and have been dazzled by it for the last six months. Now that it’s stateside, I highly recommend snagging it. Every track is fantastic and the eternally mythical Kelly Jones has outdone himself yet again on their latest effort. In all the ways that matter, it is a perfect summation of their career and an excellent starting point for people who have never heard the band.

The album opens with “She’s Alright”, another tale of an alcohol soaked encounter with a crazed member of the opposite sex. Coming from Kelly, these are always entertaining and, for me, quite serendipitous. Then we have the single, “Innocent”, a track reminiscent of the Language Sex Violence Other era. “Beer Bottle” is the third track and one of my faves. Kelly tells stories about working people that get to the very heart of the human condition and this track is a perfect example of melancholy triumph. “Trouble” is a straight on rocker that really sparkles and “Could You Be The One” is a crush-my-heart wonderful ballad. Every single thing you do is magic baby…every little thing that you do is cool, Kelly sings and we all think of that person that warmly clothes us with this feeling.

“I Got Your Number” is a nice, angry one to be played LOUD.  “Uppercut” reminds me of early ‘phonics and could easily be on Word Gets Around. In fact, each track could easily fit on one of the previous six albums style-wise, which is why I say that this record is a nice summation. “Live N Love”, with its “Helter Skelter”-ish opening, has that 70s soaked feel of “You Gotta Go There To Come Back”, as does “100MPH”,  which could easily be a thematic and stylistic sequel to “Maybe Tomorrow”.

“Wonder”, a sister song to “Dakota”, is just fucking cool and gorgeous…instantly creating nostalgia for times that never were, and regretful introspection for times long forgotten. “Beer Bottle” and this one are the best on the disc. “Stuck In A Rut” has cool soul feel and “Show Me How”, another instant classic ballad from Kelly, closes out the album with a hopeful tone.

I always laugh when NME releases their requisite ass-reaming of each new Stereophonics release (they will never forgive Kelly for Mr. Writer). I love and worship that magazine but they are way wrong about the lads from Cwmaman. Kelly’s voice is the very essence of rock and roll…whiskey, smoke, sex, and love…all wrapped up in stories you’d hear in a workingman’s pub.

That’s just how it fookin’ should be!