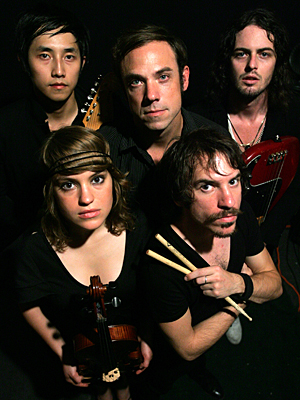 A Facebook friend recently recommended taking a listen to the Airborne Toxic Event. So I dialed up their only full-length studio album (self-titled) and took a run around the ‘hood. I was seriously impressed. It’s a little bit hard-egded in some places, some 80’s alternative influences in other areas. At points, I was hearing sounds that wouldn’t sound out of place done by the Gaslight Anthem or The Hold Steady…

It’s simply a very enjoyable record front to back. Singer Mikel Jollett has a wide-ranging vocal ability that makes you question if you’re hearing the same person from song to song. And you are.

Here’s a live version of the the album opener, the explosive “Wishing Well”. They had me right out of the gate with this tune.

Check out this album if you get a chance. I’m embedding the Rdio album here. You Rdio subscribers can kick back and enjoy the whole thing. Non-subscribers can hear the 30 second snippets (you should really just subscribe to Rdio though, just sayin’. At least check out the free trial and see how awesome it is.).

The Makings of Rain