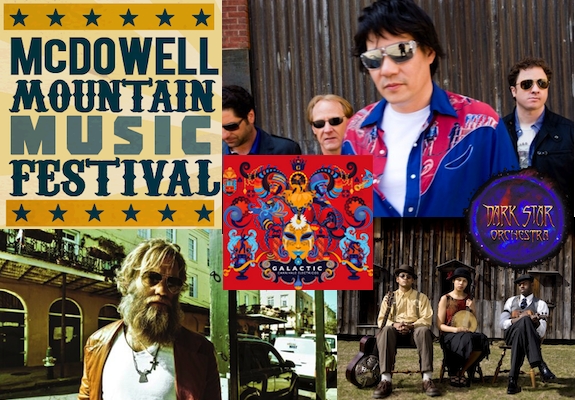 Somehow it’s April already, which for me means it’s time to gear up for another installment of my favorite Arizona music festival. The McDowell Mountain Music Festival is back for its ninth consecutive year, kicking off this Friday (the 13th) at the Compound Grill in north Phoenix/Scottsdale.

This will be the third year in a row that the Compound has been the locale. In 2010, the organizers decided to move from the more spacious Westworld complex to the Compound (owned and operated by some of the same folks that run the MMMF). Although I miss all the space (and camping) that Westworld offered, the new location makes up for it by offering a more intimate experience – closer vantage points to the stage & musicians, real sod laid out in the parking lot that surrounds the Compound, and just a cozier feel overall. But at the same time, there’s also ample space to break away if you want (not to mention the cool, A/C-cranked confines of the Compound Grill, where the Creamy Radio Stage features local bands all weekend).

Saturday’s lineup rocks and jams out with another New Orleans artist, Anders Osborne (who I’ve been waiting years to see), SoCal’s Trevor Hall (pop/acoustic/reggae), headliners Dark Star Orchestra (who recreate complete Grateful Dead shows), and probably the most commercially successful artists of the weekend, long time rock outfit Big Head Todd & the Monsters. Like a lot of you, I spent a good deal of time with the Stratagem and Sister Sweetly albums back in the day. Can’t wait to see these guys.

Late night inside the Compound, electronic jam duo EOTO (made up of Michael Travis and Jason Hamm) will melt minds from 11pm to 1am. All this madness kicks off at high noon with local band The Nameless Prophets, followed by Tramps & Thieves (also locals). The Arizona bands are solid year after year, and I look forward to checking ’em out.

And then there’s Sunday, and Sunday is no slouch lineup-wise. It all starts at noon with Carolina Chocolate Drops, who reeled in a Grammy earlier this year for Best Traditional Folk album. This old-timey trio will make you smile, make you move, and blow your mind with their mastery of traditional instruments and vocal sounds. I saw them last year at the Newport Folk Festival, and I can confirm that you do not want to miss their early 90 minute set.

Austin’s Bob Schneider is up next at 2:00 with another 90 minute set of his eclectic music – from pop to funk to bluegrass and beyond.

At 4:00, it’s time for the organ-driven soul/jazz of Soulive, a super-talented trio from the Northeast. Then, finishing off the weekend of music are Sunday headliners The Travelin’ McCourys featuring Keller Williams – bluegrass meets one-man-jam band Keller Williams. It should be something to see (and hear).

Long story short – this is an AMAZING weekend of music in a laid back & hassle-free setting (and totally kid friendly – everyone under 12 gets in free). Always a great vibe to the McDowell Mountain Music Festival – there’s a reason this will be my sixth straight year of taking it all in. Come on down…