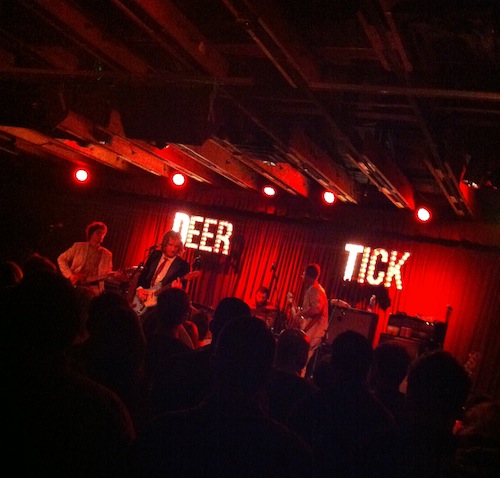 For the second time in seven months, Rhode Island band Deer Tick stopped into the Crescent Ballroom in downtown Phoenix to rock the joint with their good time fusion of bar room rock n’ roll, folk, country and punk.

The set list was largely similar to their last stop in October, featuring a bunch of tunes from their latest album Divine Providence. Once again, front man & “drunken devil” John McCauley showed why he’s one of the most raw and charismatic live performers out there. But he also shared the spotlight with his band mates – guitarist Ian O’Neil taking lead vocals on the fiery “Walkin Out the Door” and the electric piano-powered ballad “Now It’s Your Turn” (a tune whose intro reminds me of the Stones “Melody Motel”); and drummer Dennis Ryan sang “Clownin Around”, a tune he wrote about John Wayne Gacy.

The DP songs grow stronger live as they log more days and weeks on the road. “Main Street”, “Funny Word” and “Miss K” are as strong and explosive as ever. 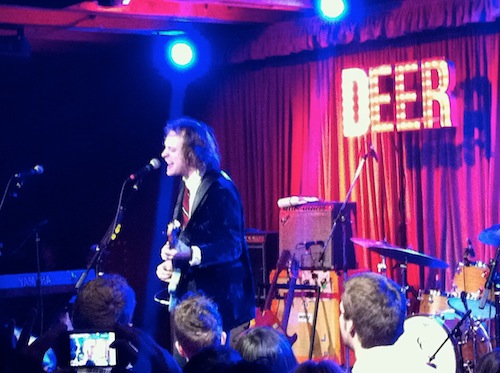 Non-Divine Providence highlights for me were “Ashamed” (cool arrangement & a killer sax solo from Rob Crowell); “Easy” (my favorite tune from Born On Flag Day); “Not So Dense” (watching John scream “I watch 60 minutes go by hour after hour after hour!!“- priceless); but most of all, my favorite Deer Tick tune of ’em all – “Dirty Dishes” – which I’d never seen performed live in my previous three DT shows.

Unlike the album version, they do the song a Capella in five part harmony. It started off a little shaky, with O’Neil jumping ahead of the others during the first verse. But everyone laughed it off and they were right back on track. The harmonies capture the sad beauty of the song, and it was a hell of a treat to see it live. If only we could get the crowd to shut their mouths during the quiet songs like this. Some people sure like to go to shows and spend their time talking and talking (and talking and talking). But what are you gonna do…

Deer Tick delivered again – a fun, killer live band – one I’ll be obliged to go out & see whenever they roll through town.

→ And I have to mention the opening band, Nashville’s Turbo Fruits. I’d never heard of these guys before seeing them on the bill with Deer Tick. But Wowee & Holy Sheeet – pure adrenaline, hard-driving, Les Paul-thrashing, cymbal-crashing, flying scissor-kicking ROCK AND ROLL. If you’re going out to see Deer Tick, get there in time to see Turbo Fruits.

Here’s “Dirty Dishes” from last night, starting near the beginning of the first verse…