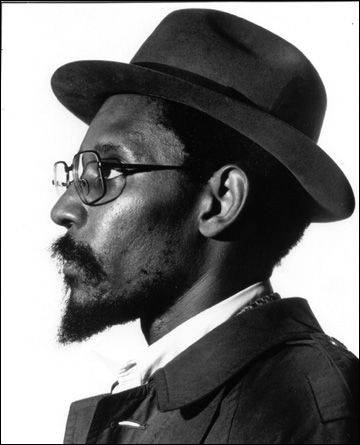 Linton Kwesi Johnson was born in Kingston, Jamaica, and raised in the Brixton section of London.

Johnson invented dub poetry, a type of toasting descended from the DJ stylings of U-Roy and I-Roy. But whereas toasting tended to be hyperkinetic and given to fits of braggadocio, Johnson’s poetry (which is what it was — he was a published poet and journalist before he performed with a band) was more scripted and delivered in a more languid, slangy, streetwise style. Johnson’s grim realism and tales of racism in an England governed by Tories was scathingly critical. The Afro-Brits in Johnson’s poems are neglected by the government and persecuted by the police. – All Music.com

Well, my introduction to LKJ a few years ago didn’t come via a scathingly critical political song, but a laid back, sweet and humorous tune by the name of “Loraine”. It’s about his encounter with the lovely Loraine on a rainy day in May. Try as he might, ol’ Linton doesn’t get the girl, which gives us the great chorus:

Now I’m standin’ in the rain in vain, Loraine
Hoping to see you again
Tears fall from me eyes like rain, Loraine
A terrible pain in me brain, Loraine
You’re drivin’ me insane

I’ve said it before and I’ll say it again: I don’t know you (or maybe I do), but you’ll like this one.

The Cover of Bruce's New Album