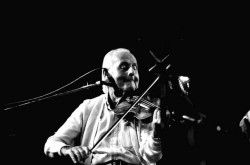 Another weekend comes to a close, and Ickmusic focuses tonight on the jazz violin legend, the late Stephane Grappelli. Born in Paris in 1908, he started off his music career as a silent film pianist. Then he met Django Reinhardt, and everything changed. They formed the “Quintette du Hot Club de France” in 1934. Grappelli dropped out of the band during World War II, but his music career stayed strong until the end of his life in 1997.

He played with a hell of a lot of folks: Oscar Peterson, Jean Luc Ponty, Earl Hines, David Grisman, Yo-Yo Ma, and many others; and would you believe Pink Floyd? I found out tonight that Grappelli actually was in the recording studio for “Wish You Were Here”, and actually plays in the closing seconds of the song. Here’s part of an interview with Roger Waters:

N.S. Didn’t you also use Stephane Grappelli on the album somewhere?

R.W. Yeah. He was downstairs when we were doing ‘Wish You Were Here’. Dave had
made the suggestion that there ought to be a country fiddle at the end of it,
or we might try it out, and Stephane Grappelli was downstairs in number one
studio making an album with Yehudi Menuhin. There was an Australian guy
looking after Grappelli who we’d met on a tour so we thought we’d get
Grappelli to do it. So they wheeled him up after much bartering about his fee
– — him being an old pro he tried to turn us over, and he did to a certain
extent. But it was wonderful to have him come in and play a bit.

R.W. You can just hear him if you listen very, very, very hard right at the
end of ‘Wish You Were Here’, you can just hear a violin come in after all the
wind stuff starts — just! We decided not to give him credit, ‘cos we thought
it might be a bit of an insult. He got his #300, though.

So if you throw on some headphones and listen to the last several seconds of “Wish You Were Here”, you’ll hear a very very faint violin. Here’s a 30 second clip of the last part of the song. Listen right at the 20 second mark. See? I’m not crazy.

Stephane Grappelli: Caravan (mp3) | You Took Advantage of Me (wma)

Now, Stephane is credited with Caravan, but I don’t hear a violin on that track. I’ll need an expert to come in and tell me how he contributed to this tune. Nick over at Jazz and Conversation? The tune absolutely smokes. You’ll see what I mean.