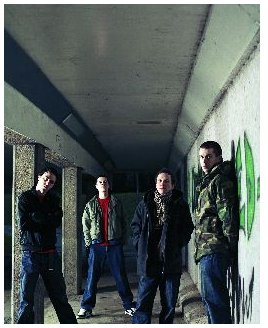 You’ve hit on the premier Ickmusic contest!! You’ll find it at the bottom of this post….. Continuing down the path of recent British-themed posts (The Style Council, The Clash, Robert Plant), today we take a look and listen to Brit band Hard-Fi. Their debut album, ‘Stars of CCTV‘, has been very well recieved in the UK (it hit #1 on the UK album charts in January). Their biggest gigs to date have been opening for Green Day at Milton Keynes Bowl northwest of London, and they just wrapped up a five night stand (May 14-18) at the Brixton Academy in London (one of a short list of bands to do five straight nights there: The Clash, Bob Dylan, The Prodigy, and Massive Attack being the others). Did anyone out there catch any of these shows?

The band rose out of Staines, a town just outside of London (the town that the great Ali G proclaims to be from). Every good band has that charismatic front man, and Richard Archer plays that role in Hard-Fi (as well as the songwriter).

So hear and see for yourself. Here’s some Hard-Fi goodness coming your way….

Now, the premier Ickmusic contest: For a brand spanking new ‘Stars of CCTV’ CD… What is the only nightclub in Hard-Fi’s hometown of Staines, Middlesex, England? Email the answer to me. I’ll select a random winner from the first ten correct answers. We’ll ship to the U.S. or U.K. (sorry to all you others!) Good luck!

UPDATE: We gotta winner! Kevin from Cary, North Carolina correctly answered with Cheekee’s. Well done Kevin. Your Google skills are impeccable. A few of you answered Simply Neon, which isn’t a nightclub, but a neon light manufacturer. Ah well. Stay tuned for more exciting contests like this!

Quote of the Day: “There’s a lot of people out there who don’t like the fact that we’ve connected with them and jumped all that kind of scenester shit, all those bands walking around dressed like they’re from a fucking charity shop when you know they’ve got money. It gets on my tits.” – Richard Archer

My new favorite saying is officially “It gets on my tits.”

The Boss in Oslo (Bosslo?)