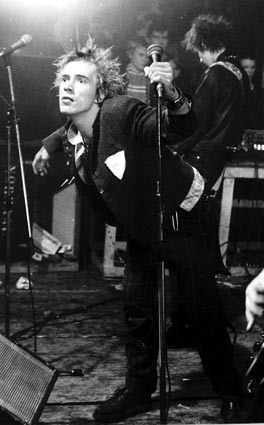 In January 1978, the Sex Pistols embarked on an ill-fated first tour of the U.S. It would last less than two weeks. By the time they finished their Jan. 14 gig at San Francisco’s Winterland, Johnny Rotten uttered these words on stage: “Ever get the feeling you’re being cheated?”, and walked off. Three days later, Rotten announced the breakup of the Pistols. They would go on to record some material without him, but the Sex Pistols as they were – Rotten, Sid Vicious, Steve Jones, and Paul Cook – were done.

The Pistols’ first gig ever under that name took place November 5th, 1975 at Central St. Martins College of Art & Design in London. Earlier that year, Malcolm McLaren took the helm as the band’s manager. It’s been debated to what degree he influenced the band, but he was very much responsible for their style and image. As former manager of the New York Dolls (1974-1975), and a fan of Richard Hell’s Neon Boys and Television, he knew that image and appearance could be major factors in a band’s success (though the Dolls broke up while he was managing them). He was also co-owner of a clothing shop in London call Let It Rock, later renamed Sex. This would become the gathering spot for the alternative / soon to be called Punk set in the London area. Members of the Pistols, the Clash and the Damned hung out there, as well as a pre-Pretenders Chrissie Hynde.

So it wasn’t long before the Sex Pistols had taken Britain by storm. The years 1976 and 1977 saw the UK punk revolution take flight. The Sex Pistols, the Clash, the Damned, and the Buzzcocks were shaking up the establishment. In that same span, the Pistols zipped through three record labels (EMI to A&M to Virgin) before they finally released their debut, ‘Never Mind the Bollocks, Here’s the Sex Pistols‘ in October 1977. Their relationship with A&M lasted a week. I guess it didn’t help that Sid Vicious trashed (and vomited all over) the Managing Director’s office after the signing ceremony. 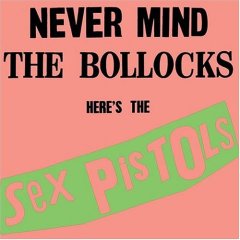 So after the release of Bollocks, things were looking up, amd it was time to go stateside for their first tour. They were booked to appear on Saturday Night Live in December ’77, but because of passport issues, that gig fell through (Elvis Costello & the Attractions took their place). They finally made it over in early January.

Now, I want you to take a look at the cities they played….

Is there something wrong with that picture? The Sex Pistols live at Randy’s Rodeo?? A swing through the South? Nothing against the “Deep South”, but were those cities really the best place to premier the Sex Pistols on American soil? Wikipedia claims that on this short tour, the Pistols were “plagued by bad sound and physically hostile audiences, mainly at unlikely venues in the South.” Whoever booked the Pistols at these “unlikely venues” must have been on some really potent stuff.

So let’s go straight to the source and hear for ourselves. Here’s the first gig of their US tour in Atlanta. To this listener, the sound is just fine (it is a soundboard recording), I mean it’s the Sex Pistols here. I don’t sense much hostility from the audience here. If anything, it’s the reverse. Johnny Rotten is vintage Johnny Rotten in his between-song stage banter: rude, vulgar, and unapologetic.

This is from the Pistols’ Press Release regarding the show, from a cool site I recently found:

The Pistols spend a quiet day-and-a-half prior to their debut, granting a few interviews (most notably to Time and Newsweek) while hordes of British journalists scurry around the hotel lobby starting, spreading and squelching various rumors…. Channel 2 in Atlanta (WSB) reports the group as 1) having green hair, 2) vomiting and committing sexual acts on one another as part of their show, and 3) heading for Houston after the Atlanta date… Alex Cooley’s Great Southeast Music Hall is packed to the gills minutes after the doors open at 7:00 p.m..Among those in attendance are 5 television crews, approximately 50 members of the press (including such notables as John Rockwell, Bob Christgau, Wayne Robins, Kit Rachlis, Tony Schwartz and Roger Wolmuth), several police officers and vice squads from both Atlanta and Memphis…. A local band called Cruisomatic opens, primarily doing cover versions of early rock and punk standards (to our ears, they are louder than the Pistols will be later, which is not very loud, contrary to what the Atlanta papers said the next day)..The rain is coming down pretty hard by the time the Pistols go on at about 10:15 p.m.; Rotten asks, “Where’s My Beer?”… “You can all stop staring at us now,” Rotten says after opening with “God Save the Queen,” “We’re ugly and we know it… See what kind of fine upstanding youth England is chucking out these days?”..About 60% of the audience is standing and doing an Americanized version of the Pogo throughout, 20% of the audience is nasty, yelling yelling and throwing things at the band, and 20% of the crowd clearly does not know what on earth is going on..A mighty blow is struck for Punk Rock!!

Nine days later, Rotten would play his last show with the Pistols.
Ten months later, Sid Vicious would be arrested for the murder of his girlfriend, Nancy Spungen. After Sid spent some time in Riker’s Island Prison, McLaren convinced Virgin Records to put up the $50,000 to bail Sid out. At a party celebrating his release on Feb. 2, 1979, Sid Vicious died from an overdose of heroin that he allegedly obtained from his addict mother. Truth is stranger than fiction, my friends.

So coming to you from deep inside Lynnrd Skynnrd territory, it’s the Sex Pistols!

God Save The Queen
I Wanna Be Me
Seventeen
New York
Bodies
Submission
Holidays In The Sun
E.M.I.
No Feelings
Problems
Pretty Vacant
*Anarchy In The UK
*No Fun
*Liar
*Tracks 12-14 are from December 11, 1977, Maasbree, Holland 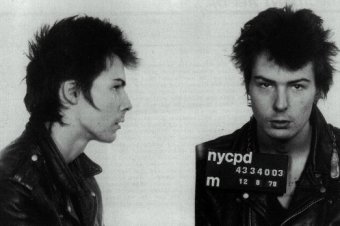