Let’s talk about the Grade ‘A’ Live American Rock & Roll experience. If you’ve seen Tom Petty and the Heartbreakers live, you know what I mean. Tom is the quintessential frontman: energetic, upbeat, and engaging. He immediately endears himself to any audience you put in front of him. I’ve seen them a number of times over the years: Milwaukee, Chicago, Denver, Phoenix; and my favorite one: front and center at The Joint inside Las Vegas’ Hard Rock Casino & Hotel in 2000 (the day after he got married).

This past weekend, TP and the Heartbreakers headlined the Bonnaroo Music Festival in Manchester, Tennessee. I was happy to hear this, because it exposes the Heartbreakers to a whole new demographic. There are tons of younger people out there who now understand the genius of Petty. A big part of the greatness of his live show is his “give the people what they want” philosophy. He has an extensive catalog of hits to choose from, and he definitely delivers them, blow after blow. Artists I admire like Springsteen and Prince, both amazing live performers, are much more selective in unearthing their past ‘hits’ to live audiences. They’re interested in their latest material, and focus on the here and now, many times overlooking crowd favorites of the past. Not to mention that Bruce completely reconfigures his live show; his last two tours have been solo acoustic (behind ‘Devils & Dust’) and the folk hootenanny juggernaut that is his current tour with the Seeger Sessions Band.

Maybe I’m comparing apples to oranges, but Tom Petty delivers his hits, and the audience responds every time. His music is comfort food. It’s familiar, uplifting, and brings back good memories. 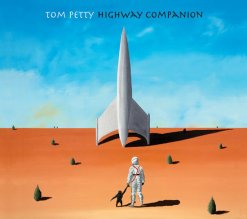 On July 25th, Petty will release ‘Highway Companion‘, another Jeff Lynne production. Lynne (formerly of Electric Light Orchestra and the Travelling Wilburys) also produced ‘Full Moon Fever’ and ‘Into the Great Wide Open’. I, for one, like the vibe Jeff Lynne puts forth. ‘Full Moon Fever’ and the two Travelling Wilburys albums are some of my favorites. So I’m looking forward to this release. The first single, “Saving Grace”, is streaming on his web site as we speak (he also played it at Bonnaroo).

Back to Bonnaroo. One of these years I’m going to make it out there. This seems like the festival for me (along with New Orleans Jazz Fest). So for those who weren’t lucky enough to be hanging out in the Tennessee countryside watching Tom Petty & the Heartbreakers, we’ll just have to settle with this… oh, and did I mention that Stevie Nicks joined in on a few tunes? Yep, including a great version of “Insider”, from my favorite Petty album, ‘Hard Promises‘.

It's Been a Long Time Comin'