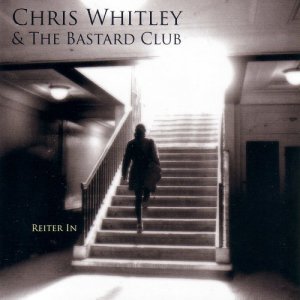 Last July, my brother and I headed up to the Rhythm Room in Phoenix to see Chris Whitley. As I wrote not soon after, it was very sad to watch. Chris was part wasted, exhausted, emotional, and enraged. It was ugly to see. The show ended after a handful of songs, with Whitley being helped off the stage. Four short months later, he was dead of lung cancer. It’s impossible to speculate what was going through his head that night I saw him, so I won’t.

What we do have left is the music. Earlier this year, the Red Parlor label released ‘Reiter In’ by Chris Whitley & the Bastard Club. The entire album was recorded in the first few days of June 2005 (just a month before I saw him), with Chris being joined by a bunch of his friends in a NYC studio. I haven’t had a chance to hear the whole album yet, but I have heard this one tune, and I’m drawn more and more to it each time I hear it. It’s hypnotic, shuffling, dirty blues. Harmonica, fiddle, snare & cymbal, and Whitley’s signature National Steel bottleneck guitar. Chris’s vocals are sparse but still powerful.

Chris Whitley & the Bastard Club: All the Beauty Taken from You in This Life Remains Forever (mp3)

I’m off to eMusic to pick up some more tracks off this album. Other songs include covers of Iggy Pop’s “I Wanna Be Your Dog”, the Flaming Lips “Mountain Side”, and Gary Numan’s “Are Friends Electric”.

Bruce wraps it up with the greatest of Ease