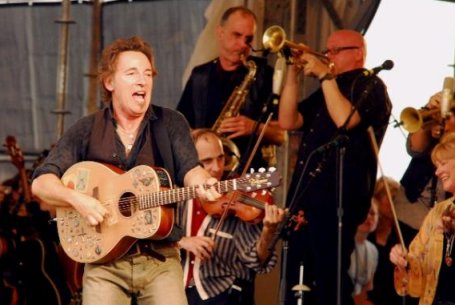 As Bruce and his Seeger Sessions Band recharge their batteries for another barnstorming fall tour of Europe, it’s time to revisit a couple of the Boss’s finer moments from the last couple of years.

Courtesy of Jefitoblog, we get ‘Love, Tears, & Mystery’, a compilation of tunes from Bruce’s solo Devils & Dust Tour (every song performed, apparently). The first volume is posted now, and keep an eye on Jeff’s site for the follow-ups. Everybody say “Thank you Jeff.” Thank – you – Jeff! Very good.

So it makes sense that I complement his post with some Seeger Sessions sounds – Amsterdam style. After the Seeger Sessions debut at the New Orleans Jazz & Heritage Festival on April 30th, it was time to cross the Atlantic for a few weeks. On May 16th, the traveling troupe hit Amsterdam. I’m very curious to know how the logistics of this tour worked out behind the scenes. Over the course of the European and U.S. Tour, the Seeger Sessions Band consisted of, on average, about 17 people. Seventeen! The amount of coordination and planning involved is staggering to even think about. Planes, buses, hotels, food, equipment, road crew… I know they have this down to a science these days, but to an outsider like me, it’s pretty damn impressive.

Here are the scheduled tour dates for the next European leg, kicking off October 1st in Bologna, Italy, and wrapping up in Belfast on November 21st (right after a 3 night stand in Dublin). Ah, the luck of the Irish! 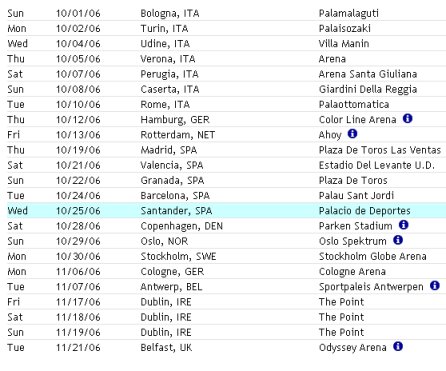 By the way, if anyone in Bruce’s camp wants to hire a music blogger to document this upcoming European tour, I’m available! Forget ’18 Nights of AOL’, I’ll give the world 2 months of ‘Ickmusic: The Seeger Sessions Tour’! I only ask for a decent wage, luxury accomodations, a bowl of peanut M&M’s refreshed bi-hourly (with the green ones removed), and an ample supply of Guiness stout. Is that too much to ask? Oh, and a 22 year old Swedish nanny for my two girls.

What changes await us? Will the band have some new or replaced members? What other songs will be given that Seeger Sessions twist? How many new Bruce fans will emerge? I can’t count the number of emails I’ve received from people who had never seen Bruce until this tour, and came out having witnessed one of the best musical experiences of their lives. The show is a remarkable and pure American musical journey, and I’m glad to see it’s not over yet.

So enjoy this flashback to May. Part one is coming at you tonight. Stay tuned for part two.