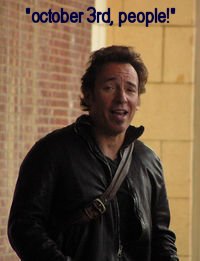 Also featured are studio versions of Blind Alfred Reed’s “How Can a Poor Man Stand Such Times and Live” and Pete Seeger’s “Bring ‘Em Home” with modified lyrics by Springsteen, as well as “Buffalo Gals” and “How Can I Keep From Singing,” which were previously included only on the DVD side of the original DualDisc edition. – – from this Yahoo article

Hmm, is this a calculated ploy to get more money from the Springsteen faithful? Or is it a semi-spontaneous, good-will gesture of getting these songs “officially” released? To be fair, the extra songs will be available as individual downloads on iTunes, but like many Boss freaks, I need to hold it in my hands. So, I’ll be shelling out a few more bucks for this edition. *sigh*

Here’s “American Land” from the US tour finale…