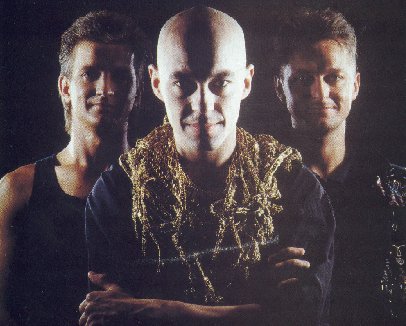 It’s an 80’s triple assault! First Journey, then Prince’s ’88 aftershow, and now the circle is complete with a 1984 Amsterdam set by Shriekback. I posted a year ago about my fondness for their 1986 record ‘Big Night Music‘. This show comes a couple years before that release.

Made up primarily of Barry Andrews, Dave Allen, and Carl Marsh, this British group formed in 1982. Andrews was originally in XTC, and Allen came from Gang of Four. Put together Allen’s strong presence on the bass, Andrews’ synthesizer and whispered vocals, Marsh’s rhythm guitar and more melodic vocals, and a mix of cool drum programming and live percussion, and you have a funky, ethereal, and very unique sound.

Shriekback got together again in 2004 after a long hiatus and recorded their 2005 release, ‘Cormorant’. You can hear a couple tracks from every one of their albums on their web site. When this Amsterdam show took place in October of 1984, they had an EP and an album under their belt (‘Tench’ and ‘Jam Science’).

This is a short set, and I’m not sure if there was more to their set this evening or not, but it’s a neat glimpse into Shriekback’s world, circa 1984.