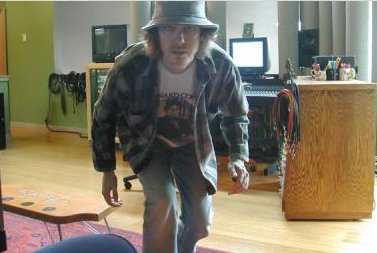 Thanks in part to a friendship with Mike McReady of Pearl Jam, Pete Droge secured a contract with American Records in the early 90’s, and released a fantastic album called ‘Necktie Second’ in 1994. The single that really caught my attention back then was “Sunspot Stopwatch”. With clever lyrics, and obviously influenced by Bob Dylan and Tom Petty, the tune sucked me in to Mr. Droge’s world, and led me to the debut album, which is great from start to finish.

The song that made the biggest impact, “If You Don’t Love Me (I’ll Kill Myself)”, was featured on the soundtrack to Dumb and Dumber (YouTube clip). It’s pretty much the most electric and uptempo song of the album. But it’s the more relaxed, acoustically oriented tracks that are my favorites: “Faith in You”, “Fourth of July”, “Hardest Thing to Do”. The album is produced by Pearl Jam buddy and producer extraordinaire Brendan O’Brien, who also produced Springsteen’s ‘The Rising’ (always a Boss connection!), and Soundgarden and Neil Young and Stone Temple Pilots and on and on.

Droge just released his fifth album, Under the Waves, last Tuesday. You can hear the album streaming on his web site or his Myspace page. I just picked up his fourth album, Skywatching, on eMusic, and am listening to it right now, and digging it immensely.

So take a listen to this great tune from Droge’s debut, and show the fella some love by checking out his links below.

Pete Droge Links: His Very Well Done Official Site | and everyone has to have their MySpace (except me! I will not succumb!)

Shriekback live at the Paradiso