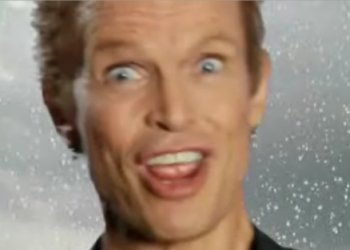 Who is this good looking fellow singing in the snow? Why it’s Mr. Billy Idol singing “Jingle Bell Rock” of course. I know it’s November, but my freak neighbors have had their Christmas lights up for a week now, so it’s open season here on Ickmusic. And I just couldn’t keep these videos to myself. I’ve been watching in amazement as Billy Idol, former member of Generation X, belts out the Christmas hits in these priceless videos.

I can’t help but think that someone put him up to this, that this is some extravagant bet that Billy plans on winning. But joke or not, Billy has released a whole album of Christmas classics, and as you’ll see, he’s as giddy as a schoolboy on Christmas morning to sing them for you…

The New Banner: some of you may notice a new banner up top. It’s nothing spectacular (I’m still working on that), but it’s a picture I took over Thanksgiving weekend in Tucson. We were walking back from a park at dusk, and saw many many birds on the wires above. So I felt compelled to snap a photo.

The picture above is only a small part of it. The full photo is here. I don’t know why, but I like it. There’s a whole lot of stuff going on in that photo. Lots of individual birds coming together to commune on the local wires at the end of a beautiful day. And of course, it can be interpreted as the five lines in a written music staff. Huh? You feeling me now? Okay, I have just spent entirely too much time writing about my bird picture. Go watch Billy again.

How to Unravel a Good Thing: Gary Glitter and Kramer

The Ramones Live in 79