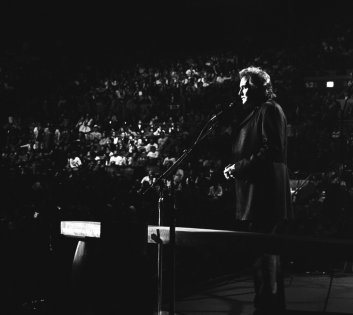 On October 31st, Mercury/UM released Johnny Cash in Ireland, an hour long concert DVD of a 1993 performance at the Olympia Theater in Dublin. He is joined by his wife June, the Carter Family,and Kris Kristofferson. If you’re a Cash fan, then you probably want to have this.

the approximately one-hour-long concert showcases Cash singing many of his greatest hits–“I Walk The Line,” “Folsom Prison Blues,” “Get Rhythm,” “A Boy Named Sue,” “(Ghost) Riders In The Sky,” “Daddy Sang Bass” and “Ring Of Fire” plus “I Still Miss Someone.”

He also sings with wife June Carter Cash (their classic duet “Jackson”), son John Carter Cash (“No Use In Treatin’ Me This Way”), Kris Kristofferson (“Big River” and “Long Black Veil”), and The Carter Family, who perform their own gems too–“Keep On The Sunny Side,” “Will The Circle Be Unbroken” and “Wabash Cannonball.” In addition, John Carter Cash solos Chuck Berry’s “Johnny B. Goode” and Irish popster Sandy Kelly joins Cash, Kristofferson and The Carter Family on “Forty Shades Of Green,” the Johnny Cash-penned tribute to Ireland.

So who wants this DVD as an early Christmas present? Look at me, December 11th, I haven’t even started my Christmas shopping, and here I am giving away a DVD on my site. Ah priorities…

GIVEAWAY: Leave a comment below. I’ll randomly choose a winner in a few days, and get the DVD shipped off to the winner before Christmas.

Another cool recent release is Johnny Cash – At San Quentin: Legacy Edition. It contains the full show from San Quentin Prison and a 1969 documentary of the event.

Here’s a promo for the boxed set…. 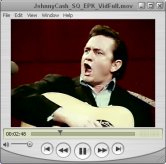 Johnny Cash: I Walk the Line (Audio stream: WMP, Quicktime, Real) – live in San Quentin (“man you in the wrong place to bend over, don’t you know it? Get up from there with that camera!”)

Prince at the Super Bowl