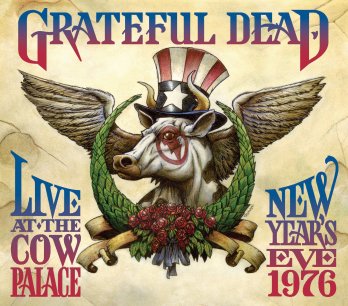 If you didn’t win this in Hidden Track’s recent contest (they took the best post title, “A Dead Giveaway”), here’s a chance to pick up Rhino’s recent release of the Grateful Dead’s New Year’s Eve 1976 show at the Cow Palace. It’s a triple CD set, it’s 180 minutes of Dead in their prime goodness, and I think you should have it. There’s a listening party right here, and you can also check out and buy the CD here.

Leaving a comment below enters you in the contest, and I’ll pick a winner early in the coming week. Because it’s late Saturday morning, and I’m high on 2 cups of coffee and cold medicine, let’s get creative. Whoever comes up with the best Grateful Dead / Jerry Garcia related haiku wins the set.

About Haiku: “Haiku is an unrhymed, syllabic form adapted from the Japanese: three lines of 5, 7 and 5 syllables. Because it is so brief, a haiku is necessarily imagistic, concrete & pithy, capturing a single moment in a very few words.”