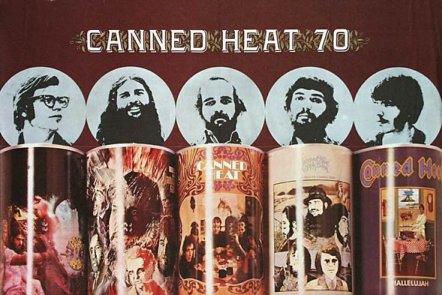 I’ll admit to being an ignoramus about the band Canned Heat up until a few months ago. I was only familiar with two of their “hit” songs: “On the Road Again” and “Goin’ Up the Country”. Well, in my quest to expand my musical mind and historical perspective, I got a hold of this soundboard recording of a1970 concert.

Canned Heat formed in Los Angeles in 1965. Their main passion and drive came from the blues, and they were responsible for helping to revive the careers of Son House and Albert Collins. Their name comes from a 1928 Tommy Johnson song called “Canned Heat Blues”. Canned heat, AKA Sterno, is a cooking fuel basically, made up primarily of ethanol and methanol. Back in the prohibition days, people would water it down and drink it (or dip some bread into it – yum!). So there’s your canned heat lesson.

The 1970 incarnation of the band was made up of Al “Blind Owl” Wilson (guitar, harmonica, vocals – the voice behind the two songs mentioned above), Bob “The Bear” Hite (vocals, harmonica), Harvey “The Snake” Mandel (guitar), Larry “The Mole Taylor (bass), and Adolfo “Fito” de la Parra (drums).

Wilson would sadly pass away later that year in September of what an autopsy determined to be a bartituate overdose – what they ruled a sucide. He died at the age of 27. Who else died at 27? Jimi Hendrix, Janis Joplin, Jim Morrison, Kurt Cobain, D. Boon of the Minutemen, and Pigpen of the Grateful Dead. Something about 27?

It’s worth it just to hear “Blind Owl” Wilson tear it up in his guitar solos. Enjoy!

* Kaleidoscope was a California psychedelic-folk band from the 60’s, built around the nucleus of David Lindley and Chris Darrow. They join Canned Heat for the last tune. Forty minutes of blues boogie jammin’.