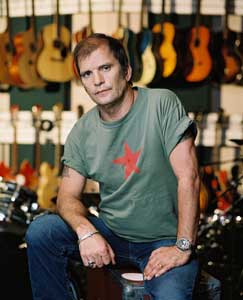 And so begins Steve Earle‘s new tune, “Goodbye Guitar Town”. He dropped into Austin’s KUT radio station last week for a nice interview and a couple of acoustic tunes, including this new one. Steve is back to his acoustic Townes Van Zandt-like, finger-pickin’ form with this tune. He’s called New York City’s Greenwich Village home for a few years now, and as he sings about in this song, NYC is home.

Listening to the interview got me excited about the new album (his first release for New West Records). He’s working with John King, who makes up half of the Dust Brothers (Beck, Beastie Boys). Steve said he’s “tested positive for Pro Tools“, which is a departure for him, and he’s working exclusively with John, vs. a band.

So there’s a lot to look forward to as a Steve Earle fan. Check out the full 38 minute interview here on the KUT Site.

There is so much more