The Phoenix area has its own cool little happening called the McDowell Mountain Music Festival. It’s coming up on April 27th and 28th at WestWorld in Scottsdale. I’m excited about the opening night, which features the Neville Brothers and Bob Weir’s band, Ratdog (among a lot of others, shown here). If you’re in the southwest, come on down.

I’ve seen both bands a few times each, but not since the mid 90’s (the best was seeing both at Laguna Seca Daze in Monterey, Calif.). So this is a must see for me, with both bands together in my own back yard. You gotta think there will be some sort of collaboration too. We’ll see. I’ll be there listening in, snapping photos, and maybe even chatting with some of the talent. 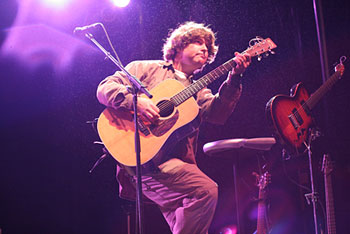 Regarding Bob Weir, he makes an appearance on the latest release by guitar and loop whiz Keller Williams. Dream was released back on February 6th. Admittedly, I didn’t know much about Keller Williams until this album, so I have some catching up to do. But this CD has been on steady rotation since I got it. It’s his 11th release dating all the way back to 1994. Maybe a KW fan here can recommend their favorite, and steer me in the right direction for my next purchase (the boys at Hidden Track, maybe?).

Keller is known as a one-man jam band. At live shows, he jams by himself on mostly acoustic guitars (many of them 12 string) while looping the guitars and vocals with a Gibson Echoplex Delay. On Dream though, the concept was collaboration. Some of the folks helping out on this album are Bela Fleck, Charlie Hunter, John Scofield, Steve Kimock, Michael Franti, the String Cheese Incident, and Victor Wooten. The album is downright pleasing to the ears, folksy and relaxed. Highlights for me are the Kimock/Williams tune “Twinkle”- an instrumental with some tasty and wholly unique guitar licks and effects ; “Lil’ Sexy Blues”, which incorporates Indian instruments like tablas and the hansa veena (with special guests Samir Chatterjee and Sanjay Mishra) ; and a cool reggae tinged tune with Franti called “Ninja of Love”. Unique sounds are a theme throughout the album.

And that brings us back to Bobby Weir, who teams up with Keller on “Cadillac”. I never thought of Bob Weir as the kind of guy to sing lyrics like: “and Jesus be riding bitch seat / cuz he’s good like that”. But here he is, doing just that. Oh, and Bob’s dog, Jackson Hamlet Weir, contributes with some quality barking. Keller, by the way, will be on the road with Ratdog this summer.