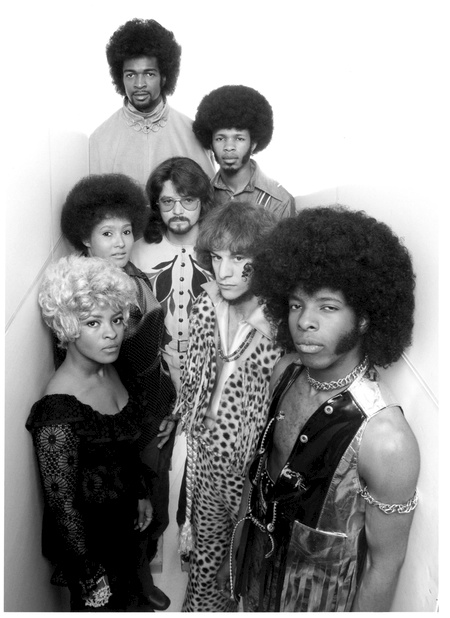 Prince sang these lyrics on his 1980 album, ‘Dirty Mind.’ He practiced what he preached with his backing band from the very beginning. Surrounding himself with black folks, white folks, male, female. But it was nothing new. More than a dozen years earlier in San Francisco, Sylvester Stewart, aka Sly Stone, had assembled a band of much the same makeup. In 1967, Sly put together the now legendary Family Stone: Fred Stewart (guitar, vocals), Larry Graham, Jr. (bass, vocals), Greg Errico (drums), Jerry Martini (saxophone), and Rosie Stone (piano), and Cynthia Robinson (trumpet).

Their mixture of funky, psychedelic, rock & soul shook up the Bay Area, at a time when bands like Jefferson Airplane and the Grateful Dead were doing some serious mind blowing of their own. Oh, to be a young person living in Haight-Ashbury in the late 60’s. Loord have mercy… Kaboom! goes the brain.

Sly and the Family Stone were signed to CBS’s Epic Records in 1967 by one Clive Davis. Between ’67 and ’74, they released seven groundbreaking albums which would go on to influence countless numbers of performers down the road, including our boy Prince. In fact, if you think about it, what band has been more influential overall on Prince? Larry Graham, after all, is the reason Prince won’t curse anymore, and the reason he changed “Sexuality” to “Spirituality”. Yep, Larry’s the one that turned Prince on to life as a Jehovah’s Witness. No birthday for you!

So Sly’s breakthrough album was 1969’s ‘Stand’, which included such funkalicious staples as “I Wanna Take You Higher”, “Sing a Simple Song”, and “Everyday People.” As the idealism and flower power of the 60’s ended, Sly pretty much lost himself in addictions to drugs, particularly cocaine and PCP. The man reportedly used to carry around a violin case full of drugs everywhere he went.

Sly pretty much dropped off the map as the seventies came to a close, and has struggled with addiction ever since. He popped up to help The Time’s Jesse Johnson on Jesse’s second album, ‘Shockadelica’, singing on “Crazay” in 1986. Since then, he was pretty quiet until 2006’s Grammy Awards, when he popped up on stage looking about 10 different types of cuckoo. I think he’s stil making an effort to clean up and get back on stage. I think I heard he showed up at a Vegas gig recently? There’s a great place to kick your addicitions…

So all seven of these albums (listed below) were reissued by Epic/Legacy in early April. I got my hands on ‘Stand!’, and for some reason, I’m going to give it away to one of you fine folks. This reissue has five bonus tracks: three mono singles and two previously unreleased bonus tracks.

The winner will be selected from the comments using a secret, proprietary formula. Or by having my one year old point to the screen. Or whichever one thoroughly entertains me. Or… you get the idea. No rhyme or reason really. Good luck! And check out some of these tracks and reissues.

Sly & the Family Stone Streamage – comin’ at ya in Real format! Keepin’ it real! Kaboom! 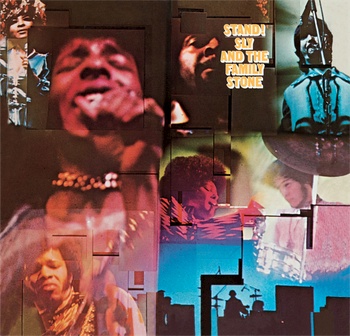