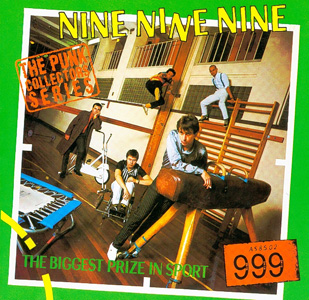 Here’s one recently heard on Sirius Satellite’s Punk channel. As much as I’ve enjoyed the Clash and the Sex Pistols, I haven’t had too much exposure in my life to other UK punk bands of the era (the late 70’s punk “revolution”); bands like the Damned, the Buzzcocks, and this group: 999.

Formed in London in December 1976, the band was originally made up of singer / guitarist Nick Cash, guitarist Guy Days, bassist Jon Watson, and drummer Pablo LaBrittain. All but Watson are still going strong to this day, and should have a new albm of material out later this year.

This song is from their fourth album, 1980’s The Biggest Prize in Sport. It has a punk / pop anthem type feel to it. Good stuff…