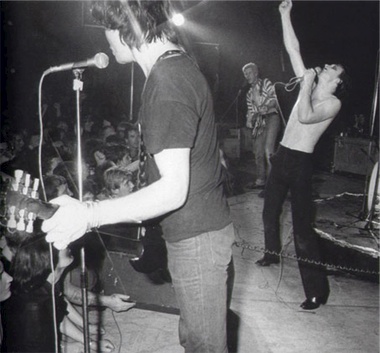 Well, while we’re at it, let’s continue the UK punk theme with the Damned. They’re punk legends in their own right, being contemporaries of the Clash and the Sex Pistols in the class of ’76. They’re still together too, though only two original members remain (singer Dave Vanian and guitarist Captain Sensible). Former drummer Rat Scabies hung around for a long time, but is no longer with them. Rat Scabies – hands down one of the best punk names ever.

If anyone wants to help keep the UK punk theme going, I’m happy to oblige. Leave some comments below with your recommendations. How obscure can we get? (I may need some help tracking down the tunes).

This live version comes from a compilation called ‘This is Punk‘ that I found on eMusic. The original comes from Machine Gun Etiquette

Check out the Damned on

| their Official Site | the video for “Smash it Up”

Update: And you all have to check out this live version of “Neat Neat Neat” from what it says is 1979. The video starts off with what appears to be ol’ Cap’n Sensible relieving himself into the crowd. Man, I’d heard about the British gobbing (spitting) craze at the early punk shows, but pissing?