Okay, so I’m 36 years old, not ancient by any means, but what I am realizing is how increasingly disconnected I am with the current popular music scene. So I’m inspired to start a new Sunday series called “What the Kids are Listening To”, a chance for us, the disconnected ones, to take a look and listen to what’s on the kiddies’ iPods. I’ll pick one out of the top 5 and we’ll all watch the video and comment. Be as nice or un-nice as you please (example, Jen from my recent Rihanna video post felt this way: “This song makes me want to dig out my eardrums with a fork.”) 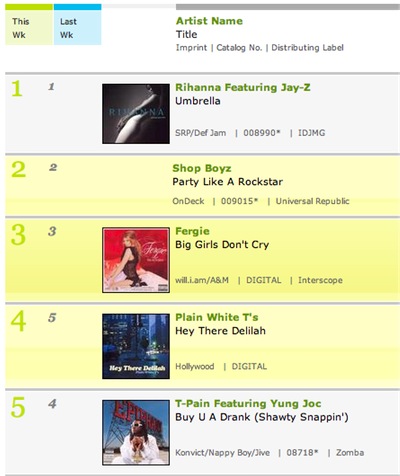 I announced my affection for Rihanna and her sexy umbrella a couple of weeks ago, so tonight I pick the only non-R&B / hip-hop tune of the bunch, which is “Hey There Delilah”, a song by the Plain White T’s. It’s sentimental, catchy, acoustic pop. And you know what? Not bad! My first thought upon hearing it was that it wouldn’t sound out of place on an Old 97’s record. It has that mellow Rhett Miller vibe for sho’. Sure, it’s as sappy as a maple tree, but I’ll take it any day over “Party Like a Rock Star” or “Buy You a Drank”.

Check out the Plain White T’s album, Every Second Counts