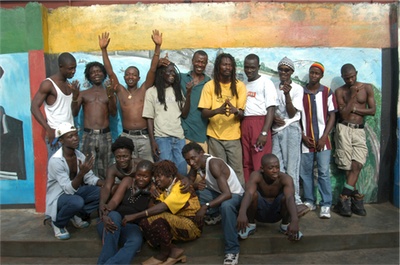 My wife and I just got done watching the newly released DVD Sierra Leone’s Refugee All Stars. As far as the horrifying subject matter that forms the backdrop of this documentary – which is the decade-long civil war in Sierra Leone – I feel much the way I felt after watching Hotel Rwanda: enraged and ashamed at the atrocities that occur, yet filled with awe and admiration for the people who rise above it all to help others. In Hotel Rwanda, it was Paul Rusesabagina who sheltered and ultimately saved over a thousand fellow Rwandans in his Kigali hotel, the Hôtel des Mille Collines. In this inspiring DVD, it’s Reuben Koroma, “Franco” Langba, “Black Nature”, and their fellow members of Sierra Leone’s Refugee All Stars who use the power of music to overcome their traumatic pasts, and to help others through theirs as well.

The film follows the All Stars from the refugee camps of Guinea – where thousands of Sierra Leone’s people fled to escape the violence in their home country – to their return to Sierra Leone in 2004. There, they recorded an album, and have since toured the world. They are in the midst of a U.S. tour as we speak, so do yourself a big favor and rent/buy this DVD, buy their album, and go see them live if they’re coming to your area. My wife and I will be seeing them here in Scottsdale on February 17th.

Here’s the trailer on YouTube. You can view higher quality trailers on this Quicktime link or this Windows Media Player link.

GIVEAWAY: To celebrate the August 14th release of this amazing film, I have a copy of the DVD available to one lucky reader. Just leave a comment below to be entered. I’ll pick out a winner in a few days. 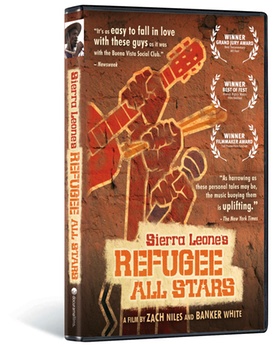 Now for some important links: