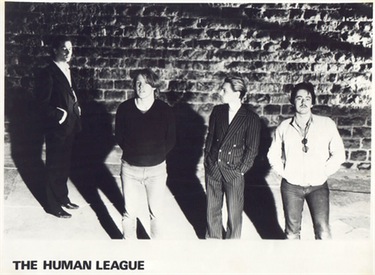 Dropping back into the early new wave scene, we go to a June 1980 show featuring the original lineup of the Human League. The founding members were Philip Oakey, Martyn Ware, Ian Craig Marsh, and Philip Adrian Wright (who ran films and slide shows onstage, but was still credited as a full band member). Oakey remains today as the only original member of the still functioning Human League. Ware and Marsh left the group in late 1980 and went on to form Heaven 17.

I’m no aficionado of science fiction or video games, but the name Human League comes from the game Starforce: Alpha Centauri, one of the first sci-fi games.

So the sound quality of this show is not superb, in fact some would argue that it’s shitty, but I still like to listen to shows like this as sort of a historical document – a piece of music history. So Human Leaguers – behold!

Check the Human League out on

MORE ELECTRO GOODNESS – As an early electronic music bonus, Radio Free Wohlman has an entire podcast “transmission” dedicated to the Kraftwerk family tree. Check the post out here. An hour full of Kraftwerk history. Well worth your while, friends.