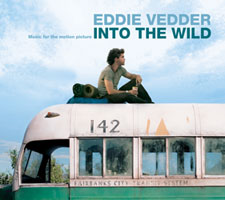 If you could find a picture of me in ’92 (though I doubt any exist) you’d see a young, scruffy, ‘musician-type’ wearing flannel shirts, drinking too much coffee and very likely listening to Pearl Jam. They were one of ‘my’ bands. You know the bands that you find long before everyone else does. I’ve had a long string of such bands in my lifetime but Pearl Jam is by far the one that started it all.

Somewhere between “No Code” and “Binaural” I lost touch with the group, and with last year’s self titled record they drew me back in. While I love the songwriting and band itself, the real draw was always Eddie Vedder and his voice, his passion, his vision. So I was giddy when I read over at I Am Fuel, You Are Friends that he was producing a soundtrack worth of solo material. I’ve had a week to listen to the record over and over and I have to say it far exceeded any unrealistic expectation I may have put on it. The tunes range from the dirge and strum of “Society” to the hope of the uplifting track “Hard Sun”, which is a cover of an obscure track by the group Indio and which I’ve provided below for everyone to sample. Have a listen and see how hard it is to not be singing along by the end of the tune.

Buy Into The Wild: Amazon |

Into The Wild (Movie): Official Site