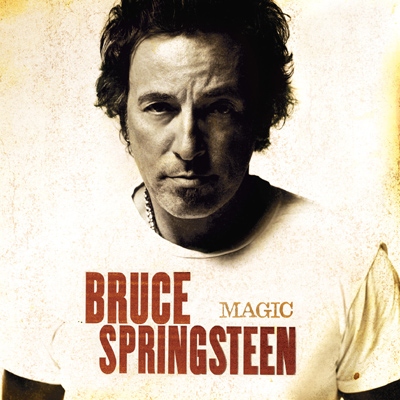 Here, Michael and I pass on our thoughts about Bruce Springsteen’s new album, Magic – song by song.

Michael: …eight-six-seven-five… Oh, hey, I didn’t realize we were starting this now. The first single and track on Magic literally made the hairs on my arm stand up. While it may be the nostalgia speaking, this is the type of track I’ve been waiting to hear for a very long time. Simple, straight-forward, anathematic and rocking, this is a great opening blast. And I, much like Bruce, just wanna hear some rhythm.

Pete: While I agree it’s a good opener, and it’s that straight-ahead, driving rocker that we love to see out of Bruce, it hasn’t made that connection with me that others on the record have. I’ll admit a tinge of disappointment on hearing it for the first time. But at the same time, I understand how it plays the role of album / tour opener / lead single. And like all Boss tunes (except for “Murder, Inc.” – probably my least favorite), it gets better with each listen.

Michael: The first thing that struck me with this tune was just how ‘deep’ it sounded. Layer upon layer of guitars create a great wall of sound that builds as the tune progresses, very much in the vein of a Jeff Lynne production.

Pete: This is the de facto album opener for me, as I often *gasp* skip “Radio Nowhere”. And when I first heard this, I knew Bruce was back on the right track. A great chorus / hook, and impossible not to sing along to. Does anyone else catch themselves singing “You’ll be comin’ around” instead of “You’ll be comin’ down”? Don’t know why, but I sure do.

“Livin’ In The Future”

Michael: Hands down my favorite track on the record. The first time Clarence Clemons appears out in front on the record and man does it feel good. Only Bruce can make heartache and pain sound so sweet. Metaphors fly left and right on this track and I’m sure that you could read into it whatever story your heart has to tell. If I had to play one track off the record to a non-believer to convert them this would be the one.

Pete: Hot damn, it sounds like I’ve put on side 5 of The River! And for me, that’s a great thing, indeed. I love the contrast in this song: a sunny, uplifting melody paired with some downright depressing subject matter: “My ship Liberty sailed away on a bloody red horizon / The groundskeeper opened the gates and let the wild dogs run. Or “My faith’s been torn asunder, tell me is that rollin’ thunder / Or just the sinkin’ sound of somethin’ righteous goin’ under?”

This is retro-Boss at its finest, but chillingly up to date in its message. One of my album favorites for sure. And like Michael says, it’s great to hear Clarence out in front.

“Your Own Worst Enemy”

Michael: Tinkling Pianos! Strings! Harpsichord! Glockenspiel! Hot damn it’s a Beatles inspired tune complete with soaring melodies, and a radio friendly 3:19 running time. By this point in the record my face is hurting from the permagrin that has been in place since the start of the record.

Pete: The intro took a little getting used to for me, but once the first chorus kicks in, there I am singing along again. I guess the intro reminds me a little of Brendan O’Brien’s The Rising production (Bruce’s last album), which I think was a little too heavy on the violins. I love Suzie Tyrell and all, but sometimes I want me some rock n roll sans the strings. Again, Bruce saves the tune with a catchy chorus.

Michael: No Springsteen record is complete without a ‘road song’. The harmonica throughout the tune gives it a creepy quality that I dig.

Pete: Read the lyrics to this one. Some intense imagery going on here (duh, I know, it’s Bruce), as Bruce and friends pay tribute to a fallen friend by taking his motorcycle to the outskirts:

Characters like “Sister Mary” and “Bobby” pop up in this one. It’s a heartbreaking look at the loss of a friend in what seems to suggest is this current war…

When you realize the context, it’s a haunting and gorgeous tribute to a life cut short.

“Girls in Their Summer Clothes”

Michael: Pete said “Wait until you hear this song” when we were first discussing the record and at first listen I did not quite get it. After a second listen, I get it. I want to live in one of these towns that Bruce sings about. It’s like Americana for a new generation. This is number three on my list of favorites from the record.

Pete: This one quickly cemented itself as my early favorite. It’s Bruce’s nod to Pet Sounds-era Beach Boys. It’s the ultimate summer song, rich with imagery of a small town neighborhood. By the last verse, it’s clear that he’s not out for an innocent stroll down the street. He’s a broken hearted fool looking for love…

She went away, she cut me like a knife
Hello beautiful thing, maybe you could save my life
In just a glance, down here on magic street
Loves a fool’s dance
And I ain’t got much sense, but I still got my feet

Good gawd, the man has a way with words. This should’ve been the lead single a month earlier…

“I’ll Work for Your Love”

Michael: “Pour me a drink Theresa in one of those glasses you dust off. And I’ll watch the bones in your back like the Stations of the Cross. ‘Round your hair the sun lifts a halo, at your lips a crown of thorns…” No additional words needed, nothing short of an amazing love song.

Pete: Amen, Michael. The first words sung pull you in immediately. This is one I like significantly more each time I hear it. I love the message: “I’ll work for your love / What others may want for free / I’ll work for your love”. Bruce, who always champions the working man, will even work his ass off for love.

Michael: Okay, there are few things that bother me here. First, I’m fairly certain that The Boss has written this song at least a dozen times before. Second, the ‘modern’ touches where production sounds completely out of place to me. Remove the silly distorted/distant voices and strings and this is a great and simple love song.

Pete: The title track is a down tempo tune singing about cards, coins, rabbits in hats, and other tools of the magician’s trade. Not one of my faves, but like pizza and sex, when a Boss tune is bad, it’s still pretty damn good (with the exception, again, of “Murder, Inc.” – not a fan, can you tell?).

Michael: I said earlier that it’s not a Bruce Springsteen record without a ‘road song’. Another vital ingredient is the touch of politics. Bruce goes above and beyond to combine the two into a stinging diatribe where “The wise men were all fools”.

Pete: “Who’ll be the last to die for a mistake”? No fan of the current administration is Mr. Springsteen, and nor am I. Bruce’s politically oriented songs may drive some the other way, but I’m glad he’s singing about it.

Michael: My second favorite track on the record. No one writes a ‘hometown’ song as well as The Boss. Clarence makes another appearance here giving the tune that certain “Jersey” feel. I can’t put my finger on it, but there is something about this song that makes me smile.

Pete: Also one of my album faves. This was the first tune from the album to make an appearance (during the Seeger Sessions tour), and I love the way it evolved from its roots. From the way the drums kick in at the start of the second chorus, to the way the lyrics in the chorus flow together – “hey pretty darlin’ don’t wait up for me gonna be a long walk home” – it’s an essential E Street tune that will stand the test of time.

Michael: I love how the guitar and string lines play off each other in this song. Closing with Max Weinberg in the ‘big room’ gives the first hint at who produced the record (Brendan O’Brien).

Pete: Okay, this one hasn’t really grown on me yet. The lyrics are incredible (unsurprisingly), but the tune hasn’t caught fire with me yet.

Michael: A touching memorial song for Springsteen’s long-time assistant Terry Magovern, who died in July of this year. This is a touching and fitting coda to this record.

Pete: In October of 1996, I waited outside of Gammage Auditorium in Tempe until Bruce emerged after a solo acoustic show to get in the van to whisk him away. Out came the Boss and Terry Magovern. You could sense the bond and kinship between them as Bruce signed some autographs and chatted with us. Terry stood a few feet from Bruce – a gentle and watchful eye on the Boss. The loss of a constant companion for the last 23 years can’t be easy for Bruce.

You can read Bruce’s comments on this tribute page. One of the touching comments…

Terry and my 23 years together were marked by the quiet, slow, methodical rituals of two men comfortably alone together, doing a job. Over time that methodicalness evolved into something deeply personal. The small things: Terry’s door open next to mine in every hotel of the past two decades, Terry in his best Ed McMahon voice as I stepped into the van at the end of each show saying “you have conquered another city, Oh Great One”, me answering, “yes, we have” then silence for the rest of the ride home, the emptying of everything from my pockets into Terry’s hands as I was about to go onstage, these are the things I’m going to miss.

The song appears as a hidden track due to its last minute urgency. It’s a great tribute.

Michael: I’ll be honest, I’m nowhere near the fan of The Boss that Pete is and I think this is damned near a perfect record. I wore out multiple copies of “Born in the U.S.A.” and “Born to Run” in my lifetime and I suspect that I’ll do the same with this. I would not be stretching in saying this is truly the best album of the year (to date).

Pete: Personally, I think this album runs circles around 2002’s The Rising. It just feels looser, more melodic, more catchy and hook-laden… more sing along to Bruce moments. And let’s face it, The Rising dealt with 9/11/01 straight on – a noble and impressive effort, but not the sunniest of topics, you know? With Magic, serious issues are still embedded here and there – but there’s a more positive quality to it.

While there will never be another Darkness or River, Magic makes a mark of its own, showing to all that Bruce – now in his late 50’s – is as relevant as ever.