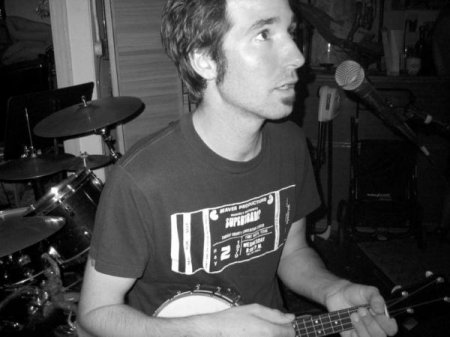 Attention to you Californians, Oregonians and Tucsonians…. Matt the Electrician is coming to your area in the next couple of weeks, and you should go out and support this talented singer/songwriter from Austin. Matt kicked off his swing through the West here in Phoenix earlier this week. Derek (my buddy of 25 years) and I headed down to the Rhythm Room to check it out, and possibly tip back a couple of cocktails.

Matt’s tools of the trade for the evening were an acoustic guitar for most songs, and a shortened banjo for a couple. He was backed up by Seela on a killer black and white Fender bass, and Jon Greene on drums and percussion. It was a nice 80 minute set, with Matt and the Band playing tunes from MtE’s latest, One Thing Right (highlights for me: “In the Waves” and “My Dog”), and past albums like Made for Working (“Milo”, “Little Hands”, “Lost”) and Songs My Mom Doesn’t Like (“Black Blackness”, Danzig’s “Mother”). He even mixed in snippets of Zepp’s “Fool in the Rain” and George Michael’s “Faith”. 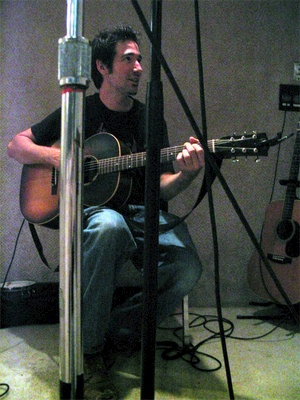 Beyond the cool, rootsy neo-folk vibe of Matt’s music, the highlight of seeing MtE live is his sense of humor and quick wit, which permeates the music, but is also noticeable in his banter with the audience. He had us cracking up as he mentioned he will be “playing for tens of people” throughout this tour of the west. His intros and speaking mid-song interludes were very entertaining. Derek told me that MtE’s sense of humor reminded him of seeing early Barenaked Ladies in small clubs back in his college days at the University of Western Ontario.

After the show, Matt was cool enough to chat with me for a good 45 minutes about the music industry, life as a musician, where to go in Austin, and other assorted stuff. Unfortunately, I was ill equipped for the impromptu interview. My digital recorder was at home, and a few Kilt Lifters and Red Bull & Grey Gooses rendered my notes pretty worthless. Let’s take a look at my notes:

“Marcus Beg Danging in the” – Ah! I remember! I asked Matt about his opinion of Springsteen. While he’s not a huge fan, he said he does have a lot of respect for him, and a couple of Boss covers in his repertoire. So, decoded, the notes translate to his two Boss covers: “Maria’s Bed” and “Dancing in the Dark.”

“Prine Jack u” – This one’s pretty easy to figure out. We were talking about the current state of the music industry, and the increasing importance of the internet. So the subject of Prince came up, and his recent hiring of Web Sheriff to do the dirty work for him- trawling the internet for copyright violations, harrassing long time fans, etc. It turns out Matt has his own story about the difficulty that comes when dealing with the purple one and his crew. Matt wanted to cover “Jack U Off” and release it on an EP. Usually, when you want to release a cover song on an album or EP, the process to buy the necessary licensing is pretty easy. Many times you can just go to the Harry Fox Agency site, search for and select the song, and pay the licensing. With Prince – ehh – not so easy. Matt requested a form from P’s people (I believe it was Universal Music Group?), and they came back with what amounted to a cease and desist letter. Jeez, all Matt wanted was the form. Sensitive fellow, that Prince.

“biken spke”: Why, that’s the Broken Spoke, of course, one of the Austin locales that Matt recommended visiting when I return. Other recommendations: the Continental Club and the Saxon Pub.

So a great evening was had. I highly recommend checking him out if he’s coming to your town. Check out the dates below. I’ll leave you with a couple of my favorite tunes from the show….

Matt the Electrician – Little Hands (mp3) – this one features Jon Greene’s adept drummin’, Matt’s tuneful whistlin’, and some damn catchy lyrics. – From Made for Working.

KT has an urgent message for you