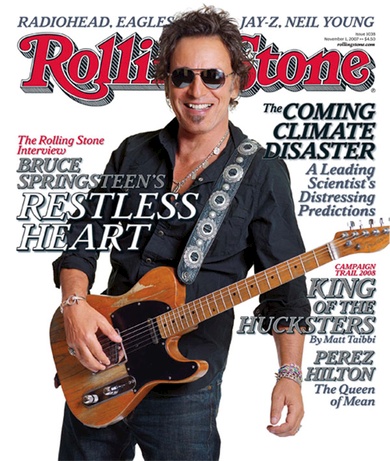 Can I dub this month Boss-tober? Okay, I will. Hey everybody, it’s Boss-tober!

The Boss is back where he belongs, on the cover of the latest Rolling Stone. I hope I’m looking that badass when I’m closing in on 60. There should be a “badass” pill 20 years down the road, right? Somewhere in a far off laboratory, there’s some pretty badass mice or monkeys strutting about. In 20 years, it’s our turn. Who knows, maybe I won’t need the pill.

So the new issue has some cool features:

And of course the tour is just getting started, and is really revving it up. The Boss & Band took Chicago by storm the last couple of nights (21st and 22nd). He busted out some tasty tour premieres last night: “Tunnel of Love”, “Spirit in the Night”, and “Thunder Road”. The latter was a request from a young boy in the crowd who was holding up a sign. I guess the video screens were zoomed in on the kid during the song. Now there’s a story of a lifetime.

Check out the set list from Monday night, and listen in on the tour premieres…

And why not buy Magic, if you don’t already have it?