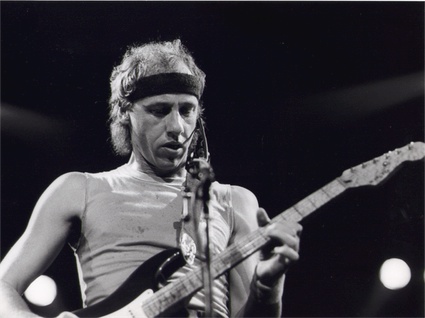 It’s time to bow to Sir Knopfler, as we travel back in time to Holland in the year of our Lord 1979. Apparently, these are the only four surviving recordings from the Dire Straits performance at the Pinkpop Festival in Geleen, Holland. This was the original incarnation of Dire Straits: Mark Knopfler (lead guitar), David Knopfler (rhythm guitar, keyboards), John Illsley (bass), and Pick Withers (drums). This show is from June 1979, the same month they released their second album, Communiqué. Their self-titled debut a year earlier raced up the charts thanks to “Sultans of Swing”, which remains that ubiquitous classic rock radio staple to this day (and a song I will never turn off – I still can’t fathom how Knopfler’s fingers can fly so fast).

With these four songs, they take a couple from their first album, and a couple from Communiqué. Click on these nice ol’ album covers to check ’em out on Amazon. By the way, has anyone picked up Knopfler’s latest album? I’ll have to put that near the top of the list…

In the Gallery (mp3)

John Prine - You Got Gold