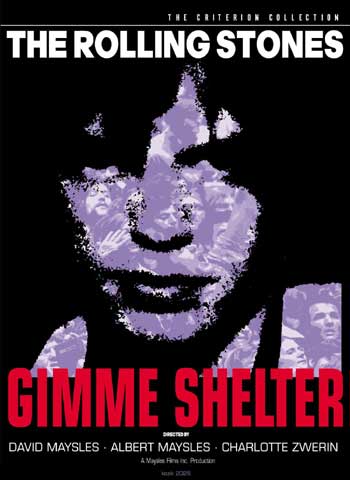 I’ve been a Stones fan for a long time, but it took me until yesterday to sit down and watch Gimme Shelter. What kind of Stones fan am I, then, you say? Good question, I don’t really have an answer. It’s only one of the most important rock documentaries in existence. Shame on me! And thanks Netflix.

Gimme Shelter documents the tail end of the Rolling Stones’ 1969 U.S. tour, which wrapped up with a free show at the Altamont Speedway, near San Francisco. The Stones originally were going to hold a last minute surprise show at Golden Gate Park, but when Mick Jagger let it slip during a press conference earlier in the week, the venue needed to be changed, due to overcrowding and logistical concerns.

So on Saturday, December 6th, more than 300,000 eager fans, drugged out crazies, and a boat load of Hell’s Angels descended on Altamont. What transpired is the stuff of legend.

The stage was only about four feet high, so it provided easy access to the throngs of fans. Leading up to the Stones, the lineup included Jefferson Airplane, the Flying Burrito Brothers, Crosby Stills & Nash, and others. The Hell’s Angels – whether asked or not is debatable – ended up providing security around the stage area. The “security” included knocking Jefferson Airplane singer Marty Balin unconscious and bashing people with pool cues. The Grateful Dead, after arriving for their set, cancelled after hearing about the ugly scene.

During the Stones set, while “Under My Thumb” played, an 18 year old black man in the crowd, Meredith Hunter, pulled a gun. Before anything could happen, Hell’s Angel Alan Passaro pounced with a knife, stabbing Hunter multiple times, stomping him, and killing him. The film captures a lot of the violence and ugliness that day (it was impossible to avoid), and it really gives the viewer a firsthand feel of the tension around the stage area.

Altamont took place only four months after Woodstock, and is considered by many to be the end of the free love / flower power era, or whatever you choose to call it. The film is most notorious for capturing the event, but don’t forget about the music. We get some great live Stones footage from Alatamont as well as an earlier Madison Square Garden gig: “Street Fighting Man”, “Satisfaction”, “Love in Vain”, “Brown Sugar”, “Sympathy for the Devil”, among others. There’s also some studio footage from Muscle Shoals, Alabama.

Stones fan or not, this is a must see for any music lover. This is an amazing and fascinating document of a legendary band in their prime, and a very unfortunate event in rock and roll history.

So as I tend to do after watching an intense film about one of my favorite bands, I spent today listening to the Stones: Beggars Banquet

(1981) on shuffle. I also tracked down a boot from the same 1969 U.S. tour. It’s called ‘Secret Garden’, and was recorded about a month before Altamont in Oakland. Enjoy!