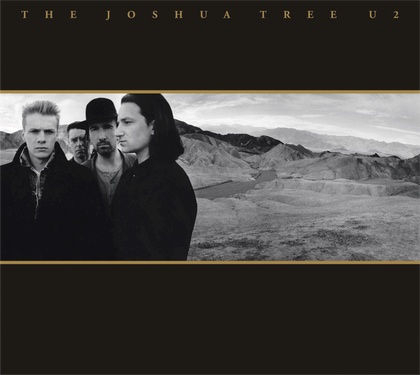 I’m about to make a U2 fan – or the U2 fan in someone’s life – very happy. I have a fresh copy of the newly remastered Joshua Tree album. But not only that. This is the deluxe edition, baby, and includes a second CD of B-sides and demos from the original sessions. It’s got a beautiful hard cover booklet to go with it – and I can’t quite figure out why I’m not greedily grasping on to it, but I’m givin’ it away. Must be the Christmas spirit. It’s certainly not due to the dismal amount of comments I’ve been receiving around here lately – you slackers.

So as exhibited in a giveaway of yore – we honor U2’s roots and return to the Irish limerick contest. This one has to be good. Here are some groundrules:

Leave ’em in the comments below and let her rip! Good luck!

Now for some assorted U2 goodness…

Find out more about the new Joshua Tree release after the jump.

U2’s The Joshua Tree has been meticulously remastered from the original analog master tapes to mark 20 years since its release and will be available on November 20, 2007.

“There has been continuous demand from U2 fans to have The Joshua Tree properly re-mastered,” says Paul McGuinness. “As always, the band had to make sure it was right, and now it is.”

In 1987, The Joshua Tree reached Number 1 around the world and won a Grammy© for Album of the Year, while U2 won the Brit Award for Best International Act and Time Magazine put the band on its cover, proclaiming them “Rock’s Hottest Ticket”. Including the singles “I Still Haven’t Found What I’m Looking For,” “Where The Streets Have No Name” and “With Or Without You,” The Joshua Tree went on to sell in excess of 20 million.

The album will be available in four formats:

The CD track listing is as follows: “Where The Streets Have No Name,” “I Still Haven’t Found What I’m Looking For,” “With Or Without You,” “Bullet The Blue Sky,” “Running To Stand Still,” “Red Hill Mining Town,” “In God’s Country,” “Trip Through Your Wires,” “One Tree Hill,” “Exit” and “Mothers Of The Disappeared.”