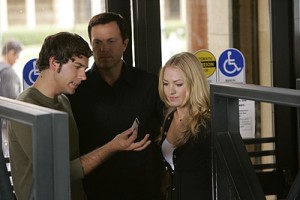 While I was planning on stockpiling as much scripted television as possible in anticipation of the glut of reality television set to descend on us the snow and ice delivered to my front doorstep today had other plans. The wife and I decided to enjoy a marathon of my new personal favorite Chuck. At the conclusion of the episode Chuck vs. the Nemesis I could not have been more psyched to hear one of my favorite tracks from Band of Horses new release Cease to Begin. I won’t give the plot away, but I’ll say that the inclusion of the track “No One’s Gonna Love You” was a perfect emotional point.

I don’t think that I need to sell many of you on this, but you should all own this record. For those who need a reason, here are live performances of two of my favorite tracks from the record: “No One’s Gonna Love You” and “Marry Song”.

A Few Moments with Joni Mitchell