A guest post coming to you from reader & fellow funk brother # 1, Jshua….. 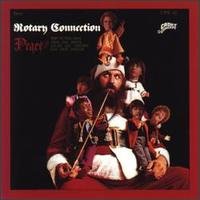 Happy Holidays Brothers and Sisters (or as I like to say–Happy Holy Daze….)

Today’s topic of discussion comes from the legendary Rotary Connection, who discovered way back in 68′ the secret behind Santa Claus’ is….

Actually, it makes all of the sense in the world.

1) Living at the north pole.
2) Riding HIGH on his sleigh.
3) Leaving milk and cookies for him (aka the munchies).
4) His JOLLY behavior.

Three points of interest which makes this particular song/album/and legacy of interest.

1) Sidney Barnes is the lead singer on the cut, and is also the one of the legendary songwriting partners of George Clinton and the Parliafunkadelicment Thang Inc, a huge part of the “northern soul” movement. Never mind the stuff that he did at Golden World.

2) That female voice is the legenday Minnie Ripperton and if you’re not familiar with her, you should be! Start with Come to my Garden (1970) with the Ramsey Lewis Trio as the backing band (featuring a very young Maurice White on drums).

3) Charles Stepney (arranger, composer and producer) – Now, if y’all don’t know about Charles, then you wouldn’t know that Charles is the secret behind Earth, Wind & Fire, period. Check out every Rotary Connection album and the first Minnie album and you’ll find out why Maurice (as EWF alumni would suggest) was the quarterback and Charles was the coach of that band until his untimely death in 76′.

But then again, never mind me….I hope you enjoy the music.