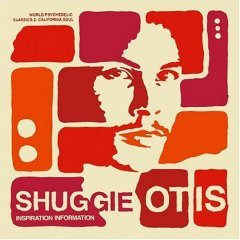 One of the categories I forgot to include on my Year in Music post was “Best Aged Album Discovered This Year”. Undoubtedly, it was 1974’s Inspiration Information

by Shuggie Otis. Some buddies on my defunct Prince forum recommended Shuggie as sort of a “Prince 1.0”; or Prince, rather, as Shuggie 2.0.

One of the standout tracks on this record, “Strawberry Letter 23”, was later covered by the Brothers Johnson, who turned it into one of the top R&B tracks of 1977. Almost thirty-four years after its original release, the album sounds fresh and ahead of its time.

David Byrne reissued it in 2001 on his Luaka Bop label. Stylistically, the songs are all over the map. The two I give you here are a short blast of Innervisions-era funk (“Ice Cold Daydream”) and an electronic instrumental slow jam (“Pling!”). But you need to hear the whole thing, especially the finale, the 12 minute plus trippy soul/funk suite “Freedom Flight”.

Happy New Year! An Ickmix just for You...