I know you’re probably all sick of the obligatory year end list mania sweeping the interwebs, but indulge me, if you will, as I throw in a few favorites myself. I give you…. 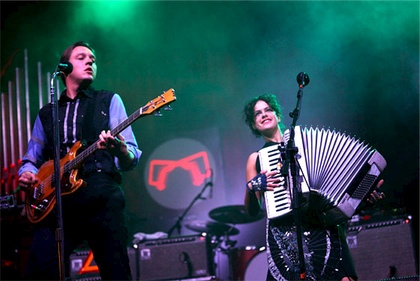 1. “Intervention”, by Arcade Fire – Win Butler and his band of gypsy maniacs known as Arcade Fire rocked my soul with this song. I had the heard the song in earlier incarnations, specifically on one of AF’s Morning Becomes Eclectic appearances. But it was after Neon Bible

was released, when I was on a run with the iPod, when this song raised the hairs on my arms, brought tears to my eyes, and zapped me with an extra dose of adrenaline. In my opinion, “Intervention” is an epic masterpiece, joining songs like “Purple Rain”, “Thunder Road”, “London’s Burning”, and Steve Earle’s “Goodbye” on my mantle of all time favorites. The church organ, the lamenting lyrics that spotlight the brave and innocent soldier stuck in a unnecessary war:

“I can taste the fear
Lift me up and take me out of here
Don’t wanna fight, don’t wanna die
Just wanna hear you cry.”

“Intervention”s lyrics are a bitter reminder of our current leadership here in the U.S – an administration that continues to take a giant dump on a lot of the ideals of our forefathers. As of this writing, there are 390 days left of this god-awful president and his gang of deceivers. The door’s over there, fellas – don’t let it hit you in the ass.

2. “F.U.N.K.”, by Prince – Who knew? He still has it in him. All it took was a little passion and anger to get a great song out of him. Too bad his ire is directed at his most passionate fans – those who have carried him through his career. Finally, we get inspired, funky, creative Prince. Whatever it takes, I guess!

3. “City of Immigrants”, by Steve Earle 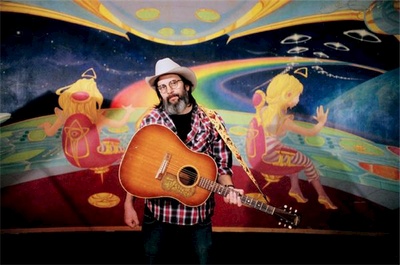 Though it’s still hard to adjust to the latest live incarnation of Mr. Earle (Steve, a guitar, two turntables and a DJ), he released a very solid album this year – Washington Square Serenade

– and to me, this track stands out from the rest. NYC / Brazilian group Forro in the Dark back Steve up in this spirited homage to New York City’s immigrant roots. Steve’s delightfully upbeat mandolin playing, Forro’s Brazilian percussion, and the sweet backing vocals of Allison Moorer make this one of my favorites of the year.

It’s worth watching the Letterman performance of it too…

Albums of the Year:

Refreshing. Like opening the windows on a cool, sunny morning. The man just has it, doesn’t he? His talent at songwriting and tunesmithing (not to mention performing) leaves me in awe. Bruce’s tip o’ the hat to Brian Wilson and sixties pop, “Girls in Their Summer Clothes”, leads the charge for me. But there is no shortage of excellent songs on this one: “Gypsy Biker”, “Long Walk Home”, and “Livin’ in the Future” to name a few. Now if only Bruce would book a date in Phoenix on his early 2008 tour. Still nothing, and it’s killin’ me!

This album reached out to the mellow, country-rock side of me, and wrapped its arms around me. I’ve enjoyed all of Wilco’s albums (particularly from 1999’s Summerteeth on) for their spontaneity and originality. You just never know where they’re going to head next. When I threw on Sky Blue Sky, it immediately connected, right from the opening notes of “Either Way”. It’s the opening salvo of songs 1 through 4 that move me the most: “Either Way”, “You Are My Face” (can there be a cooler song title?), “Impossible Germany”, and the title track. I could listen to Jeff Tweedy sing the phone book. His scratchy, smoke & whiskey-soaked voice makes jeff one of my favorite vocalists around.

Disappointment of the Year:

No one wants a great Prince album more than me. Every year I hope I’m going to hear it, but once again, Prince underwhelmed. Songs like “The One U Wanna C” and “Somewhere Here on Earth” were the highlights for me, and gave me some hope. But duds like “Mr. Goodnight”, “Lion of Judah”, “Resolution” and the title track pollute Planet Earth enough to make Al Gore pitch a huge hissy fit. And the song that had the highest funky Prince potential – “Chelsea Rogers” – is marred by Shelby J.’s mic-hogging, with Prince’s vocals just a footnote in the background.

The Throwing It All Away Award of the Year: 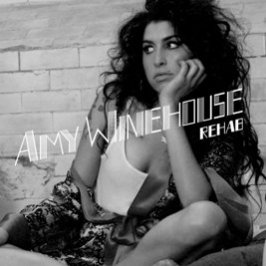 I discovered Amy’s music back in February when I heard the retro, soulful, yet still modern “Rehab” of hers. Then I picked up Back to Black. What a VOICE! Effortless and so rich with soul. Then it soon became apparent how troubled she was (and is). Her demons & addictions (and those ratty old ballerina slippers she insists on wearing) have been all over the tabloids and gossip web sites this year. Surrounding herself with folks like her hubby Blake Fielder Civil and chronic fuck-up Pete Doherty don’t bode well for her future. Of course Blake is locked up now for the foreseeable future, but it doesn’t look like she’s using it as an opportunity to straighten herself out.

Back to Black was recently nominated for six Grammy awards. We’ll see if she even turns up for the ceremony (by the way – Year 2 of Ickmusic Live Blogging the Grammy’s, comin’ up!). You can’t help but pull for her, though. So much talent. Get it together, Amy!

Ahead of the Curve, by Lateef & Z-Trip

Rise Up, by Zeph & Azeem

These two joints were a breath of old school fresh air to my hip-hop starved lungs. If you’re looking for something – anything – to prove to you that real hip-hop is alive & well, pick up these two albums now.

Best Live Show of the Year: Arcade Fire at Austin City Limits Music Festival, September 15th. 90 minutes of adrenaline-filled bliss for me. They are one of a kind: inspiring, energetic, and grandiose. Like I’ve said before, there’s something powerful about Win Butler’s stage presence and charisma. The defining moment of this show was their encore finale, “Wake Up”… a sea of humanity singing along with the band, a collective of goosebump-filled arms raised in the air. To me, Arcade Fire are one of the defining bands of our generation. There’s something very special about these guys & gals.

Best New (to me) Artists

Music is all about discovery for me. Often times I don’t pick up on an artist until well into their career. Here are a few that I came across this year – some who have been around a while, others who haven’t.

Aceyalone – Acey has been a fixture on the LA underground hip-hop scene for years. I was finally brought into his world through his reggae/hip-hop album Lightning Strikes.

The Avett Brothers – These guys hail from Concord, North Carolina, and knocked me out with this year’s album, Emotionalism

Brett Dennen – Five words: “There Is So Much More”

British Sea Power – This powerful foursome from Brighton, England pushed me on a recent 10k race. I look forward to hearing a lot more, and seeing them when they come to town.

Cat Power – Thanks to an Austin City Limits TV performance, I have been turned on to Chan Marshall – aka Cat Power. Amazing singer, and completely and utterly unique. I’m loving this girl.

Look out in early ’08 for her latest album of covers, called Jukebox (click the cover to find out more)…

Damien Rice – One song sucked me in: “The Blower’s Daughter”. It led me to his two great studio albums, O and 9. Irish singing / songwriting at its finest.

Joseph Arthur & the Lonely Astronauts – Catchy hooks and melodies, a smoking hot bass player. What’s not to like?

So what will 2008 bring? No idea, but I look forward to finding out. Don’t be shy about sharing your favorites with me. I’m always interested in quality tunes, wherever and whenever they may come from. Drop me a line, or join my new forum.