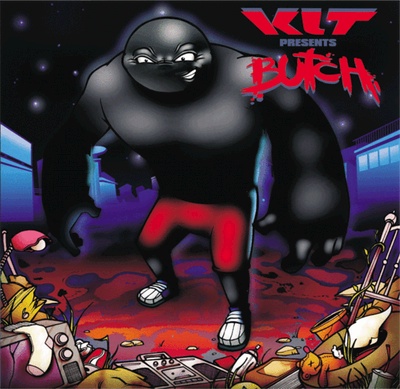 Kenny Carter is a KC-area musician very much influenced by Uncle Geroge and the P-Funk Universe. One of Kenny’s projects in recent years was KLT – a sort of KC area funk collective. In 2003, they dropped KLT Presents…Butch. Knowing my penchant for Prince and all things Funky, one of my readers, Steve, passed along a link to this album on CD Baby. I enjoyed it from the first minute of the first song I listened to: “Lamblast”. I believe it was the System who so wisely said, “Don’t Disturb This Groove”….

Butch is an orphaned stick figure superhero from the planet Grunt. One day, ol’ Butch is transformed into “a big, black mass of muscle with giant hands that can crush just about anything”. This album is the first in a trilogy, detailing the stories and adventures behind Butch.

Now, the album was released in late 2003, and – well – there isn’t a whole lot that’s been updated on their web sites since. But the album is funky and entertaining enough to merit a listen… and maybe we can coax Kenny and KLT back from the planet Grunt or whatever galaxy they’ve zipped off too, and demand some more!

Thanks Steve for the tip. Always glad to be tipped to the f-u-n-k.

Funk it up now.