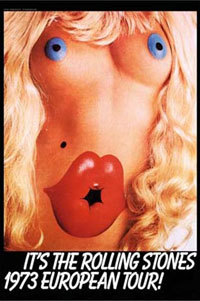 This, my friends, is the Stones in arguably their finest form. They were touring in support of their latest album, Goats Head Soup, the follow-up to 1972’s Exile on Main Street (a tough album to follow!). Mick Taylor absolutely shredded up the stage with his lead guitar work. You’ll hear it all first hand in this great quality show.

This was intended to be an official live album, but in the early 70’s the Stones were still bound to to an agreement with their former record label (Dekka/ABCO). So the first post-Dekka official live album didn’t come out until ’77 (Love You Live), seven years after they left Dekka.

One of the great musical memories I have are the years in my late teens when I was discovering the Rolling Stones catalog, particularly their albums from the 70’s – and even more particularly – the greatness of Exile and Sticky Fingers. So to come across a show like this for the first time is really a treat.

And if you’re a young ‘un or just new to the Stones, fasten your seatbelts…

Nov 17, 2011: The show is now officially available on StonesArchive.com.